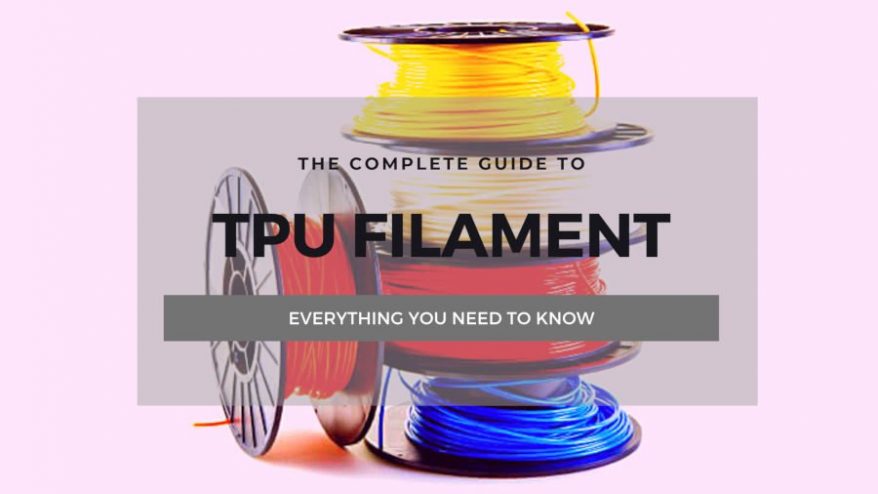 This article not only recommends the best TPU filaments for your projects as well as the best 3D printers for TPU, but also explains the advantages and disadvantages of TPU versus other filaments, as well as key best practices for fantastic looking TPU 3D prints.

TPU, or thermoplastic polyeruthane, is a plastic filament often used in FDM 3D printing to create flexible parts. It has a higher glass transition temperature than PLA (60-65C), at around 80C, and can handle low temperatures well without becoming brittle.

Clear TPU filaments exist for those who want transparent, flexible prints, and a major positive is that TPU prints without any of the odors associated with ABS 3D printing. TPU 3D printed parts are however not food safe.

The general consensus is that the best 3D printing temperature for TPU is around 230C, with a wider range of between 220-250C.

Though you do not absolutely have to use a heated bed, it is highly recommended, at around 50C, though some go as low as 40C or as high as 60C.

It is recommended to use a cooling fan with TPU.

We highly recommend reducing your print speed when 3D printing TPU. This can be frustrating, especially if you have invested in one of the fastest 3D printers around, but it will be far worse having to continuously unclog your 3D printer’s nozzle if you print too quickly.

We recommend printing at around 20-30mm/s with TPU. This is because TPU’s softness makes it more difficult to consistently extrude the right amount of filament, which can cause clogging, errors, and failed prints. It is better overall to go slow and steady, rather than go hell for leather and have to keep unclogging.

These settings should be slower across the board. Print your first layer, supports, perimeters and have retraction speed slowed down for more reliable TPU 3D printing.

With a Flexion extruder you may be able to print slightly faster, at around 30-40mm/s. Flexion extruders are specifically designed for flexible filament 3D printing, and can handle the nuances and coiling of filaments like TPU better.

Use a build surface like PEI or blue builder’s tape along with glue stick or similar for adhesion. Be careful however if you are using PEI sheets, as TPU sticks very well to these sheets. Use extra glue stick or other surface for adhesion to prevent parts pulling off the PEI sheet after printing and fusing with it.

Direct drive extruders are considered better than bowden extruders for TPU, though Bowden extruders can work fine with the right settings. This is because direct extruders are directly connected to the hot end, and therefore there is less travel distance between the extruder for filament to clog, coil or cause any other kind of error.

With a Bowden extruder, flexible filaments have a longer travel distance to the hot end, and can cause problems if the TPU filament coils and clogs along the way. For this reason, makers using a 3D printer with a Bowden extruder may want to consider reducing print speed even further, down to around 15-25mm/s.

How much does TPU filament cost?

TPU is slightly more expensive than ABS and PLA, starting at around $35 for starting blends on sites like Amazon. Higher quality TPU filament starts at around $45-$50, and is available on Matterhackers.

For a full guide, read our best TPU article.

Some cheap 3D printers can print TPU without much issue, though a number of these more basic printers struggle. We have included a list below of some of the best 3D printers in each price range that are known to be able to handle TPU.

TPU is often used in the manufacturing of phone and tablet cases. Its ability to absorb shocks, vibrations and impacts also makes it great for tires, as well as many other custom rubber parts used as shock absorbers.

TPU is also used in 3D printed shoes, especially in shoe soles. Several interesting 3D printed shoe projects have used TPU filaments, as well as PEEK. Additionally, TPU is sometimes used for caster wheels and those seen on chairs, desks, and other appliances like drive belts.

How to Store TPU

TPU is hygroscopic, meaning that it absorbs small amounts of moisture from the air. Without airtight storage TPU filament will begin to deteriorate significantly over the course of just a few days. Specialized filament storage containers can remedy this, which we recommend below.

Without good storage and desiccants, prints with TPU come out noticeably rougher, with an uneven surface finish, a holey appearance and more stringing. Filament dryers, such as one we recommend below, can restore the smooth surface area TPU filament is capable of, by removing most of the accumulated moisture.

We recommend the following:

Some people recommend putting TPU filament that has been out in the open into an oven for 30 mins to an hour at around 70C to heat off the moisture that can ruin the filament. 3DMN has shown the difference on his YouTube channel when you heat TPU like this.