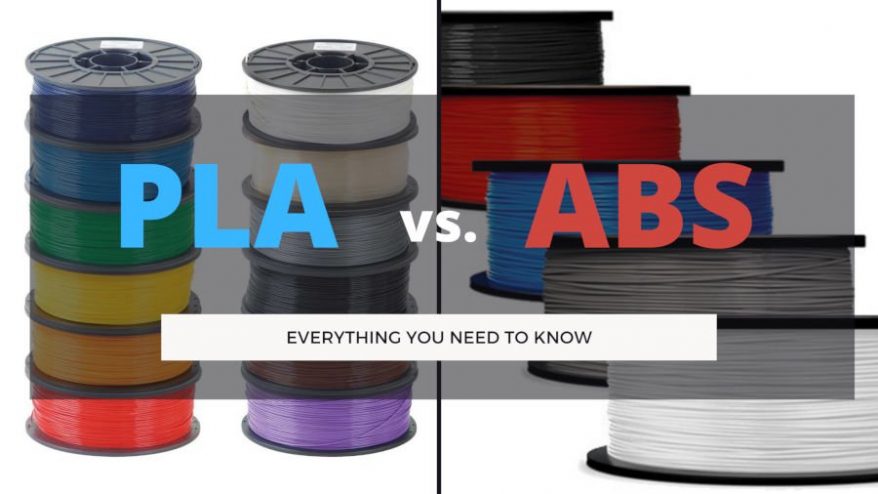 If you have an FDM 3D printer then you’re 90% there, you just need some 3D printer filament to print with. PLA and ABS are the two most common filaments used by all the best 3D printers for makers and hobbyists today. So which is best for you? This article compares PLA vs ABS across a variety of important factors to determine which is best for your personal 3D printing needs.

Similarities between PLA and ABS

Before we compare differences, it’s important to talk similarities. ABS and PLA are both thermoplastics, meaning when heated they melt so you can print them in your desired shape, and become solid again when they cool. PLA and AB also cost roughly the same, around $20/kg. You use them both within fused deposition modeling, via a nozzle, layer-by-layer.

As for similarities, that’s about it.

Overall, PLA is easier to print. PLA at a lower printing temperature, at 190-220C rather than 220-250C, and warps less than ABS, with ABS parts also prone to cracking and curling.

PLA also does not require an enclosed print chamber or a heated bed, though we still recommend one, whereas it is crucial to use a heated bed with ABS to reduce warping. Use a heated bed at between 95-110C with ABS, and if using a heated bed with PLA we recommend 40-70C. This adds complexity to your 3D printing experience, and involves additional 3D slicer knowledge to implement the correct settings.

Many 3D printers with an open print area, such as the Creality CR-10 that can accurately print PLA, may struggle with ABS as they do not have an enclosure to carefully regulate print temperature. We do not recommend printing ABS without an enclosed chamber, restricting the number of 3D printers available to use for ABS printing.

However, PLA does require a cooling fan, as without a fan parts will deform heavily, especially delicate areas that overhang. ABS does not require a cooling fan, though some makers use them for very small ABS parts. PLA is also prone to oozing and stringing, which can cause issues with printing. ABS is less prone to these issues.

Overall however, PLA is definitely easier to print than ABS, and more 3D printers can easily print PLA than ABS.

Warping can be a huge problem when trying to print accurately with ABS. The bottom layers of ABS prints often warp and curl upwards, especially with long and flat parts, leading to less sharp corners and less accurate parts. ABS parts are also prone to cracking in their midsections due to the stretching of the plastic. This warping renders ABS prints unusable unless you use a heated bed and an enclosed printing chamber to prevent the part cooling too quickly.

Moreover, when printing with ABS you’ll need a heated bed, to avoid serious issues with print quality. PLA does not require a heated bed due to its lower melting temperature, though we still recommend using a heated bed to minimize warping.

ABS is known for its use in electrical casings and shells, due to its good electrical properties. Many electric clocks, wires and other electronics like TVs use ABS casings. ABS is also very scratch resistant, which can be important for parts that need to retain their glossy appearance and endure a lot of use over time.

Overall, ABS parts have superior mechanical properties and are tougher and more durable.

ABS and PLA filaments we recommend

Here are some filaments we recommend, offering good quality at good prices:

This one is less a competition of which is objectively best, but simply what you are looking for. Both PLA and ABS offer good surface finish on printed parts, but differences emerge in post-processing.

ABS vs PLA surface finish verdict: it’s down to your personal preference.

It is easier to polish ABS parts, giving them a shiny and attractive appearance. This can easily be done by rubbing acetone onto your print, reducing the visibility of individual layers and smoothing out the part. PLA parts can be polished by using liquid polish, but ABS is known to be better suited for polishing.

Both PLA and ABS can be painted using acrylic paints. PLA is however more difficult to work with if you plan on using other post-processing techniques like sanding or machining, as it is softer and brittle. More care must be taken during these processes to avoid damaging the part.

ABS vs PLA for post-processing: ABS is considered easier to polish, and easier to sand and machine.

As expected, both materials have fairly wide usage beyond 3D printing.

ABS is commonly used in toy production, most notably Lego, as well as in car parts, pipes, and electrical housings.

PLA is used in products such as cups, plastic bags, cutlery, medical implants, and more.

Both PLA and ABS are used for rapid prototyping — the fast creation of parts, usually by 3D printing, that are tested based on size, shape, function, and iterated and improved based on the results. PLA is typically used for low cost, aesthetic parts that do not need to stand up to wear-and-tear or any high heats, whereas ABS is used for more functional parts that will see extended use.

For color options, both PLA and ABS offer almost any color you could ever want, from black to grey to mauve to yellow to blue. Both have a variety of different blends for emphasizing different characteristics, such as LW-PLA for lightweight parts, or wood-filled filament. PLA arguably has more of these options available.

ABS vs PLA applications verdict: depends on your priorities.

The main difference in term of environmental healthiness is that PLA is usually biodegradable, whereas ABS is not.

This is because PLA is made from renewable resources such as corn starch or sugar cane, and degrades in under 2 months in an industrial composter, or in around 4 years in water — far better for the environment than ABS. PLA can be produced renewably by growing crops.

ABS on the other hand is made from petroleum-based compounds, a non-renewable resource, though it can be recycled.

Moreover, because PLA is made from harmless and renewable resources, no harmful or unpleasant fumes are created when PLA is extruded. This contrasts heavily with ABS, which when melted is not only unpleasant, but can cause headaches and feelings of nausea.

PLA vs ABS: Which is best for beginners?

Beginners to 3D printing prefer simplicity and reliability, they want an easy experience without errors or hassle. For simplicity, PLA is preferable as no heated bed is required, cutting down on the number of settings to optimize in your 3D slicer, and printable on any 3D printer, even those without enclosures. The cooling fan requirement with PLA does increase complexity somewhat however.

PLA can also clog and ooze, which less proficient makers will prefer to avoid.

Overall however, PLA is better for beginners.

PLA vs ABS for Kids?

The main advantage of PLA for younger makers, from teens to kids experimenting with creating their first 3D models with their parents, is that PLA melts at a lower temperature with no heated bed required. This serves to make the 3D printer safer for younger children and kids to use, as any prying hands will be less likely to burn themselves on a less hot extruder, and without a hot print bed to burn themselves on.

Both PLA and ABS are safe for kids if you use a 3D printer with a closed chamber or enclosure, but without one, PLA is safer for kids than ABS.

Therefore, the filament you choose is basically down to which you value more for your printing needs.

If you want a strong, ductile model and don’t mind investing extra in a 3D printer with a heated bed and enclosed build chamber, go for ABS. If your priority is an easier to use filament, and don’t want to invest in a heated bed, you’ll prefer PLA.

Neither is objectively better, both are extremely popular. The choice you make is down to you. If you’re looking for a middle ground between PLA and ABS, consider PETG filament.