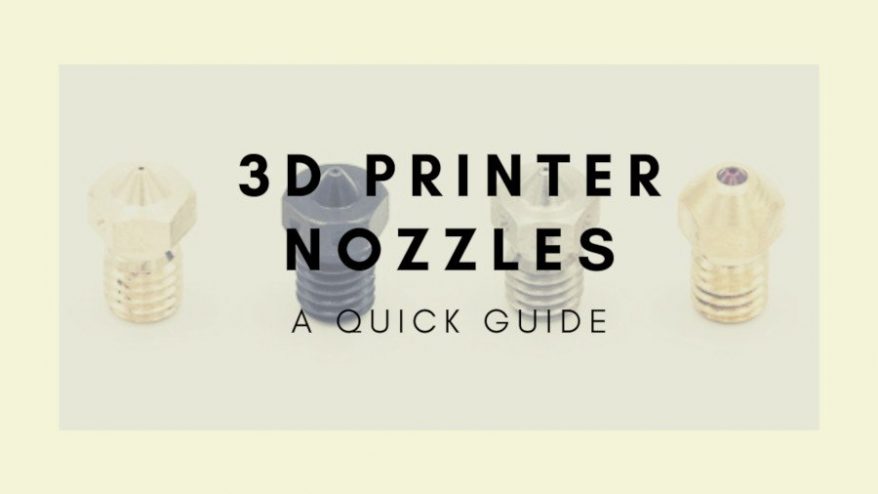 A 3D printer’s nozzle is the part that plastic filament passes through to be deposited onto the print bed, forming your part. For such a small part, the nozzle has a huge impact on the quality of your final print, the time required to print the model, and how often filament clogs, causing errors.

The two main factors people vary for use on their 3D printers is the nozzles size – diameter – and the material the nozzle is made from. Both factors dramatically affect part strength, print time, and the materials you can print.

If you have ever iced a cake, the nozzle’s function will come easily to you. A 3D printer’s nozzle functions the same as an icing nozzle, just instead of you squeezing delicious, sugary icing onto a cupcake or sponge cake, plastic filament is melted and extruded through the nozzle mechanically.

The standard 3D printer nozzle diameter is 0.4mm. The smallest nozzles start at around 0.1mm, and sizes of 1.2mm or even 1.4mm can be bought, but nozzles between 0.2mm and 0.8mm are most commonly used.

There is a trade-off with using either a large or small 3D printer nozzle. To sum it up briefly: with a larger nozzle you can extrude more filament at once and therefore print faster, though with a smaller nozzle you can print more intricate and precise details.

When you use large nozzle sizes, such as a 0.8mm nozzle, parts start to become more rough textured and the ridges denoting each layer become more obvious. Even with 10% infill however these parts are very strong, and print very quickly.

Faster printing: Larger 3D printer nozzles deposit more filament at once, finishing prints quicker. A 0.8mm nozzle will print the same part roughly 4x faster than with a 0.4mm nozzle – these are not marginal gains but exponential speed increases.

Less change of filament clogging: Larger nozzles also reduce the chance of filament getting clogged, and therefore the failure rate of a print. This is because smaller nozzles have a smaller surface area to become clogged and therefore the chance of this occurring is increased, whereas larger nozzles have a larger area to encompass. There is also a reduced window of opportunity for the print to fail as large nozzles print quicker.

Therefore, if you are using a 0.2mm or 0.15mm 3D printer nozzle, it is integral to use high quality 3D printer filament to reduce the chances of clogging. With filaments such as wood- or metal-filled filaments, larger nozzle sizes (of around 0.5mm+) are necessary as they clog at smaller sizes far more often.

Better for rapid prototyping: For rapid prototyping when the goal is to create a rough, strong prototype quickly, a large nozzle size is ideal and will take less layers to print the part. A 0.8mm nozzle prints roughly 4x as quickly as a 0.4mm nozzle, so if you sell 3D printing services and want to produce more parts or prototypes for clients for whom intricate precision is not a priority, increasing nozzle size can be a very profitable decision.

More precise: Smaller nozzles however are more precise and can print far finer details than larger nozzles. This important for 3D printing miniatures and other intricate parts like 3D printed jewelry pieces.

However, if your 3D printer is not capable of these very precise layer heights and cannot produce your targeted resolution, then having a small nozzle will not make any difference to the quality of your prints. Increasingly even cheap 3D printers on the market today offer 50-micron precision however, making using a smaller nozzle diameter for precision a smarter choice.

A general rule is the absolute maximum layer heights you should print with is 80% of the diameter of your 3D printer’s nozzle. This is the most extreme amount, and typically 50% or less is recommended.

So for a standard 0.4mm nozzle, based on this rule the maximum layer height you should print with would be 0.32mm, though recommended would be 0.2mm or even 0.1mm.

Brass 3D printer nozzles are the standard nozzles for desktop 3D printers. They are cheap, conduct heat from the heater block within the 3D printer hot end well to melt and deposit filament, and are even compatible with tougher filaments such as Nylon and PETG, as well as handling PLA and ABS with ease.

Brass nozzles however cannot handle abrasive filaments well. For these filaments, such as NylonX, or wood- or metal-filled filaments, other nozzle materials are used instead, such as stainless steel, hardened steel or even ruby-tipped nozzles.

Stainless steel nozzles work adequately with these filaments, but will wear down more quickly and need replacing more often than hardened steel 3D printer nozzles. These treated steel nozzles are more durable and will last much longer with moderate printer use.

The ultimate 3D printer nozzles are ruby-tipped 3D printer nozzles. They are still the same nozzle shape, but with a small ruby on the tip of the nozzle in place of the previous metal. Rubies are completely abrasive-resistant and will simply never wear down, no matter how much you use the nozzle to print.

They cost far more however, but some prefer to pay a large upfront cost for a ruby nozzle that won’t need replacing. The non-ruby part (made out of brass or other material) can wear down however, so the nozzle is not indestructible.

Overall, it is generally accepted that unless you are printing industrial levels of abrasive materials – at least several kilos per week – that you will not see a positive ROI from a ruby-tipped filament. Most makers suggest buying hardened steel 3D printer nozzles that do not need to be replaced often and cost far less, saving you money in the long run. Nevertheless, ruby nozzles usually work very well, and provide another premium option for your printer’s nozzle.

When to change your 3D printer’s nozzle

Nozzles wear out over time and need to be replaced periodically as they encounter the filament material being printed. Brass nozzles wear out fairly quickly, and it is not uncommon to go through them monthly. In contrast, hardened steel nozzles will likely last a year even with frequent use.

It is simple to gauge whether the nozzle needs to be changed by how worn down it looks. A nozzle that requires changing will be markedly less sharp, the triangular shape part will be far shorter and with an enlarged opening, and generally every side will be blunted.