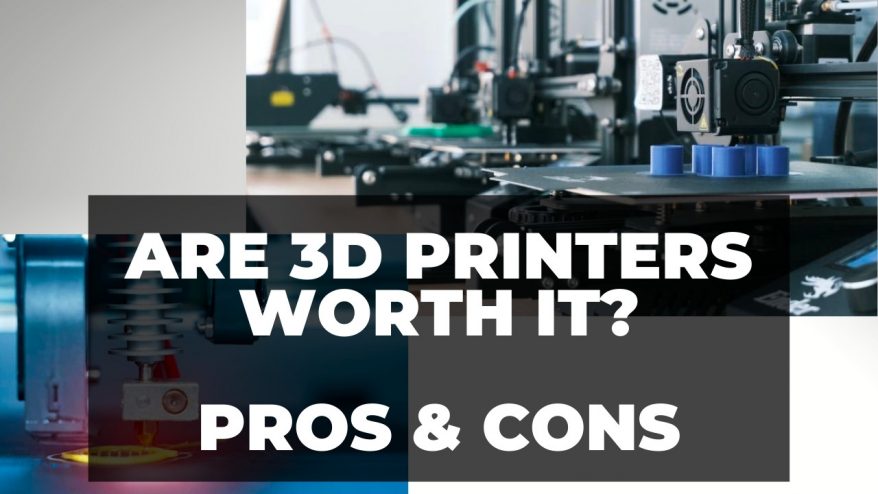 Are 3D printers worth it? A question likely on the lips of many makers on the cusp of shelling out for their first printer.

With 3D printing more accessible than ever before, and prices at their lowest since consumer-friendly machines exploded onto the scene, now seems like an ideal time to take the plunge. There’s a 3D printer for all budgets and skill levels.

As a site dedicated to 3D printing, we’re more than a little biased. But, we’re well aware that 3D printing isn’t for everyone. Though owning a printer opens the door to creative possibilities and myriad applications, it can be demanding and frustrating.

To help you avoid nursing pangs of regret a few months down the line, or conversely, give you the confidence to kickstart what can be a deep and gratifying hobby, here’s what’s worth considering before buying your first 3D printer.

Is a 3D Printer Worth Having?

A 3D printer is worth having: you can 3D print almost anything at home even with a $200 3D printer, including replacement parts for broken appliances, action figures and other toys for your kids, and almost anything else you can imagine. There are millions of free STL files online for you to download and print, or you can even design your own files to 3D print.

A World of Possibilities

One of the biggest advantages of owning a 3D printer is the possibilities it opens up. A 3D printer is first and foremost a tool, and chances are, if you can think it up, a 3D printer can bring it to life in three-dimensional glory.

While you’ll initially head over to Thingiverse to bring to life all manner of wacky bits and bobs, the real magic happens when you let your imagination run wild and make the step to designing and printing your own ideas.

A Hobby for the Curious Tinkerer

Though manufacturers have done well to democratize the technology and make it more accessible, 3D printing remains a tinkerer’s hobby. There’s a sizable chasm between owning a 3D printer and producing quality prints. So, there’s plenty to learn along the way. The skill set required will see you branch out into other fields, including design, electronics, and computing.

While this might not suit everyone, those who enjoy immersing themselves in a complex hobby and letting their curiosity guide them will find plenty of pleasure in demystifying the art and technical underpinnings of 3D printing.

Enable and Expand Other Hobbies and Skills

3D printing can be leveraged to bolster and enable other hobbies, making it an extremely versatile addition to any maker’s tool kit. There’s no end to how 3D printing fosters other hobbies, and that’s one of the best reasons to get a 3D printer.

For example, if you’re into tabletop gaming, you can produce no end of figurines or terrain. If you like to express your love for this or that pop culture icon, from Marvel characters to your favorite anime, a 3D printer can churn out customized models.

Love collecting retro games? You can 3D print decorative storage solutions. Want to spruce up your interior design with bespoke pieces? 3D print vases, decorative pieces, and so much more.

As with any business venture, using a 3D printer for money-making and business ends comes with its share of uncertainty. But with planning, a little luck, and a clear business plan, it’s possible to leverage a 3D printer to fuel a small business.

Etsy is awash with creators who make a living selling their 3D printed creations, and a quick Google search reveals a glut of 3D printing services fueled by industrial-grade 3D printers.

3D printing rubs shoulders with the likes of woodworking and pottery as one of the most rewarding hands-on hobbies.

From assembling the printer to firing off that first print, by way of tweaking settings and making modifications to getting over those troubleshooting humps, there’s a genuine pleasure in chasing down that perfect print, acquiring skills, and learning the ins and outs of your 3D printer.

If you’re the type of person who loves self-led discovery and finds learning fun, few hobbies deliver quite as much personal gratification as 3D printing.

From multiple-hour prints for simple projects, not to speak of mammoth 24-hour or more sessions for larger parts, to hours spent perusing forums and watching YouTube tutorials by way of endless slicer tweaking, 3D printing gobbles up your time.

Other than using your 3D printer periodically every few months, in which case you may want to question whether it’s buying in the first place, there’s no way around the fact you’ll need to invest substantial amounts of time to get the best out of your machine.

With the pace of life already moving as rapidly as it is, investing so much time in yet another pursuit, especially one that will fall firmly into the hobby category for most, simply isn’t on the cards. That’s probably why eBay, Facebook Marketplace, and Craig’s List are awash with second 3D printers with barely a scratch on them.

3D printers are complex and can have issues

3D printing is synonymous with troubleshooting. Encountering issues is not a question of if but when they’ll pop up.

Regardless of whether you buy an entry-level machine or a $1,500 premium 3D printer, you’ll invariably spend quite a bit of time solving problems. Whether that’s leveling the bed correctly, improving first-layer adhesion, tweaking retraction settings in the slicer, or tightening up belts on the printer itself.

If the thought leaves you cold, 3D printing may not be for you. But, if you’re open to solving problems and enjoy overcoming an often steep learning curve, there’s plenty of satisfaction in detecting, assessing, and fixing issues.

3D printing is expensive, and the costs continue to mount the more you print. Prints will fail, and you’ll eat through spool after spool of filament in no time. Parts will fail and need replacing. And, of course, there’s the initial cost of the printer itself.

That said, a $20 1kg spool of PLA houses enough material to produce dozens if not hundreds of models, which if you were to buy them retail, would cost you vastly more money.

In that respect, 3D printing can an extremely affordable hobby, if you’re replacing a costly buying habit.

Printer’s paralysis is real. What do we mean by this? Let’s set the scene.

You’ve printed a handful of objects, likely pulled from Thingiverse or courtesy of a ‘best 3D print ideas’ lists. Then a few more bits of glorified plastic that serve no actual purpose, yet more pieces of arbitrarily molded junk thrown into the world to slowly find their way into the environment. And a few more.

What’s next? Knowing what to print becomes a tough task with so many possibilities at your fingertips. Before long, the 3D printer’s been left to gather dust for weeks on end and is starting to look like a rather bulky paperweight.

Unless you have a clear idea of what you want to print and the creative desire to match or have an ancillary hobby that you can enable and expand upon with a 3D printer, the initial shine and appeal of 3D printing can rub off rather quickly.

What Can You Use a 3D Printer For?

When asking yourself, ‘is 3D printing worth it?’ it’s essential to understand what a 3D printer can and can’t do. Though 3D printing opens the door to many possibilities, there are hard limits to what you can do, defined by the natural properties of materials, printer specifications, and build volume.

To avoid disappointment, we recommend establishing a firm idea of what projects you want to undertake and checking that a printer is indeed up to the task. To help, here’s a quick breakdown of typical 3D printing applications possible with a consumer-grade 3D printer. This is a loose list and there are countless niche applications and inventive ways people use 3D printers out there.

You may have read articles about 3D printed houses, medical equipment, jewelry, clothes, sneakers, prosthetics, and dental solutions. While these are possible, they are generally beyond the capabilities of most 3D printers under $1000 and require industrial-grade machines.

For a more detailed analysis of the costs involved, check out our dedicated How Much Does a 3D Printer Cost To Buy & Maintain guide.

Are 3D Printers a Waste of Money?

The cost of the printer, the ongoing cost of filament, replacement parts, and buying good quality STL part files if you aren’t designing them yourself means you’ll sink a hefty sum into 3D printing if you stick with it.

But, this won’t come as a surprise for those accustomed to spending money on hobbies. Whether spending the money is worth it depends on whether you’ll derive satisfaction, develop new skills and gain knowledge over time, and, ultimately, have fun with 3D printing. For many, this is priceless and well worth the investment.

When asking yourself, ‘should I buy a 3D printer?’, it’s worth thinking honestly about whether it’s a flight of fancy or something that could evolve into a long-term hobby – why do I need a 3d printer?

Is 3D Printing an Expensive Hobby?

Absolutely, even an entry-level 3D printer sets you back around $200, with higher prices for better and more performance-oriented machines. On top of that, you have to factor in ongoing costs, such as materials, replacement and modification parts, the cost of design software, electricity, and less tangible costs such as space, time, and effort.

Is It Profitable to Buy a 3D Printer?

For most, buying a 3D printer isn’t profitable. Only a tiny fraction of owners successfully turn a 3D printer into a thriving business. The market is already saturated with professional part printing services, Etsy stores selling all manner of artistic and functional pieces, and STL file designers/sellers.

For business, the story is a little different. A 3D printer can be a robust product development and prototyping tool that’s much cheaper than traditional casting and modeling methods. But, this depends on a product going to market, mass production, and sustained sales to turn your investment into profit. So even here, profitability isn’t guaranteed.