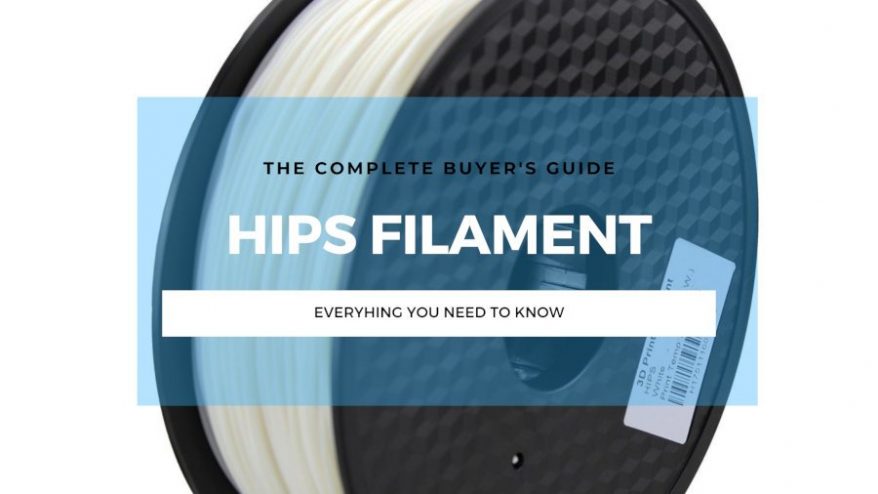 What do you do when you want to print a more complicated design, one that has overhanging parts that require support or involves a lot of detail? How about a situation where you want to print a prototype, one where painting or gluing will be involved.

Or maybe you simply want to stretch the envelope a bit and try printing with a thermoplastic that you haven’t tried before, one that’s fairly easy to use.

If any of these situations apply to you, then HIPS could be the support filament you’ve been looking for.

However, HIPS isn’t just a support material. It’s also a very capable 3D printing material in its own right. In fact, we think it’s one of the most underrated available.

In this article were going to take a look at HIPS support and see what it is, examine its main features and benefits and give you some tips on how to 3D print with HIPS material so that you get the best results.

What is HIPS Filament?

HIPS stands for high-impact polystyrene. High impact polystyrene is a synthetic copolymer that is strong, durable, non-toxic and recyclable. In addition, HIPS is soluble in Limonene, an easily obtainable solvent that is derived from the skin of lemons.

Chemically, HIPS is a graft copolymer incorporating pure polystyrene and polybutadiene rubber. It combines the hardness of polystyrene with the elasticity of rubber to produce a high impact thermoplastic that is tough and strong without being brittle.

Commercially known by the trade name Bextrene, HIPS is widely used to manufacture toys and appliances. It is also used for product packaging and cases.

When is support material needed? Well, all 3d printers, by necessity, start printing an object from the bottom of the design and then progress upwards.

Because of this, if you have a design that incorporates overhangs, areas in the print job that don’t have any underlying support, you’ve got a problem. You see, your printer can’t successfully extrude filament onto thin air.

HIPS can be used to provide the necessary support that these overhanging areas require. The printer first lays down HIPS under where the overhang will be and then lays the selected printing material down on top of the layer of HIPS. The HIPS supports the overhanging material and prevents the warping, deformation and collapse that would occur without the support.

Once the printing is complete and the object has cooled, you remove the HIPS by submerging the object in Limonene. After 24 hours, the Limonene will have dissolved the HIPS leaving you with a print job that has clean, crisp angles, corners and overhangs.

There is no need for knives, scraping or sanding. The solvent does all the work leaving you with beautiful results.

HIPS works really well as a soluble support material when ABS is used as the printing material. If your support material and your printing material have significantly different printing temperatures you run the risk that the one will warp and deform the other due to this difference. HIPS and ABS share nearly identical printing temperatures. This means they will lie together cleanly without any warping or deformation due to heat.

HIPS also makes an excellent printing material in its own right. When comparing HIPS vs ABS, you’ll notice it’s harder and stronger than either PLA or ABS, but is just as easy to use. It won’t warp as easily as ABS.

HIPS 3D printer filament can be glued using any one of number of specialty adhesives. It also handles sanding well and can be painted with ease. This makes HIPS 3D Printing an excellent choice for mockups and prototypes.

Some comparisons to ABS and PLA include:

The data stats of HIPS back up its ability to be used in a wide variety of applications. HIPS density has a specific gravity of 1.05 g/cm³. This is comparable to the density of ABS but is less than other thermoplastics such as PLA or PMMA.

HIPS has a Rockwell hardness of R 95 which, again, is comparable to ABS, slightly more than PLA and significantly less than PMMA.

So, with HIPS Plastic 3D printing you get a material that shares many properties with ABS, but is also easily soluble and can be machined, sanded, glued, and painted.

It is this versatility that makes HIPS printing filament an excellent choice for a soluble support material, prototyping and as an all-around general printing material.

When it comes to comparing HIPS vs PVA (polyvinyl alcohol) as soluble support materials, it quickly becomes apparent that the two are apples and oranges. The lower printing temperature of PVA works means that it will work much better with a material like PLA while, as we’ve discussed, HIPS dissolvable filament and ABS are more suited to each other.

Both are equally soluble, PLA in water and HIPS in Limonene, so the only reason to pick one over the other as a support material comes down to what printing material you are using for your job.

When it comes to printing with HIPS, there are a few things to keep in mind in order to get the best results possible. First, HIPS prints best at a temperature between 230°C and 240°C. Don’t be afraid to play around with temperatures in this range to see what works best for you.

Next, your printing bed should be set to a temperature of anywhere from 90°C up to 115°C. Again, experiment with temperatures in this range to find the sweet spot that allows HIPS to properly adhere without curling or warping.

After your print job has finished, wait for it cool completely before removing it from the printing plate. HIPS 3D printing material can still be workable when warm and it will bend if you try and remove your object too early.

When a print job that you’re running gets ruined because of inferior product, you’ve not only wasted your time, you’ve also wasted money. Low-quality filament yields low-quality results.

In the end, you’ll actually spend more on replacement filament than you would have spent stocking up on quality product. Make sure you choose a high-quality HIPS support material (or any filament, for that matter) when printing.

Limonene is an affordable and readily available solvent made from lemons, oranges, and other citrus fruit peels.

If you’re using HIPS as a soluble support material, you want to immerse your printed object completely in Limonene and wait at least 24 hours for the HIPS to completely dissolve. It can help move things along if you give the container the object is in a couple of gentle shakes now and again.

And while HIPS dissolves completely in limonene within around 24 hours, this doesn’t affect ABS, making it perfect for removing HIPS supports from ABS parts with a dual extruder 3D printer.

HIPS prints at the same temperature as ABS, making it the most appropriate dissolvable filament for ABS. Other dissolvable materials such as PVA filament print at far lower temperatures and will not work with ABS, and for this reason PVA is instead commonly used when 3D printing PLA.

HIPS is a forgiving 3D printer filament, and can work well with Kapton tape, PEI sheets, glue stick and hairspray. If using a build surface that adds height to your build plate, remember to adjust your first layer in your 3D slicer settings before printing.

However, as with ABS, HIPS releases toxic fumes when melted and 3D printed. Therefore, it is essential to store your 3D printer in an area with good ventilation where you will not inhale any styrene fumes.

Some HIPS filaments and selections we recommend are included below:

To 3D print HIPS as a support material, you’ll need a dual extruder 3D printer, and a printer with a closed enclosure.

We recommend a number of these in our dual extruder buyer’s guide.

Applications of HIPS in 3D printing

HIPS is most used as a support material for ABS 3D printed parts to be dissolved post-print in limonene.

However, HIPS also has standalone uses in aesthetic parts and projects such as cosplays and other costumes due to its glossy clear finish, as well as in 3D printed toys and other appliances. Its light weight, strength and ease of painting and post-processing also makes it a great filament for testing pre-manufacturing models.

Outside of 3D printing, HIPS is used in toys, laptop, CD, DVD and phone cases, and is used extensively in signage and point of sale displays due to its ability to be vacuum formed, bent and molded into shape with ease.

Due to being classed as food safe, HIPS is also used in millions of food and drink packaging, disposable cutlery, and yoghurt pots every year.

History of HIPS in 3D printing

German apothecary Johann Eduard Simon first discovered polystyrene back in 1839, but it was not industrialized and sold until almost a century later in 1931 by I. G. Farben company.

However, standard polystyrene is brittle, and was therefore unsuitable for many industrial uses, and other materials were generally preferred.

A solution was found however by mixing it with polybutadiene – a synthetic rubber – to create a copolymer called HIPS, making it tough yet flexible and solving the brittleness problem. This primed HIPS to become a wildly successful material used in signage, point-of-sale and food packaging across the world.

What extruder temperature should you print HIPS at?

Depending on your HIPS filament, generally print between 230°C to 240°C, with the higher end of the scale better for adhesion. If you are struggling to get good layer adhesion, increase the temperature, but if you encounter stringing or oozing, lower the temperature slightly and check your retraction settings.

Do you need to use a heated bed and enclosure to 3D print HIPS?

Yes. Though it doesn’t warp quite as much as ABS, HIPS filament will warp if you do not use a heated bed and a heated chamber or enclosure. Use a heated bed of between 90°C and 100°C depending on your type of HIPS filament, though 100°C+ can be best for adhesion. Higher temperatures prevent warping due to the material cooling too quickly.

How much does HIPS filament cost?

Standard HIPS filaments typically cost between $30-$55, depending on the quality and blend. Though more expensive than basic filaments such as PLA or ABS, HIPS falls far below the industrial filament prices of Polycarbonate and carbon fiber filaments.

Yes, HIPS is fully recyclable. However, check your local recycling center to ensure they accept HIPS before attempting to recycle it.