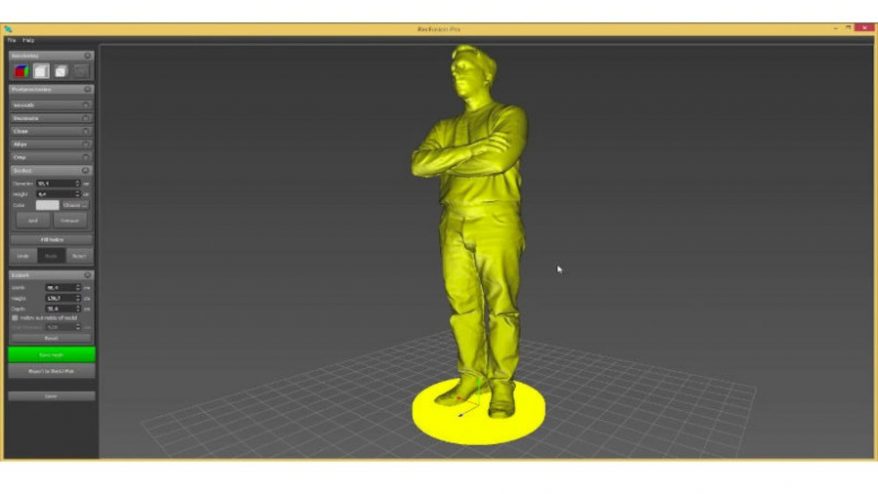 3D scanner software has a lot of uses. From scanning objects to be rendered and recreated with 3D printing, to examining and modeling structures for architecture. 3D scanning software can even be used on people for medical scans, security purposes, and even making 3D printed selfies.

Software of this kind isn’t always cheap, and the open-source options are often lacking in the power and features that professionals or higher-level students need to conduct their work.

These key differences along with the plethora of 3D scanning software available today make it quite difficult to know which one you should use.

If you’re shopping around for 3D scanner software, you’ve likely been caught up in this confusion yourself. Here we’re going to look at some examples of the best 3D scanning software available today.

Whether you’re in an industry that requires 3D scanning, or you’re a 3D printing enthusiast who wants to expand into more exciting projects, you’re sure to find something here to fit your bill.

Skanect is a 3D scanner software for PC and Mac. While not the most advanced photogrammetry app on the market, it’s certainly one of the cheapest. But don’t let the low price tag fool you, Skanect does feature a host of tools for everyday scanning use.

Not only a 3D scanner software, Skanect also has editing tools that are capable of some highly precise model manipulation. This is great news for those of you who want to create newer or improved objects from initial scans, such as correcting faults or running aesthetic simulations.

Despite this precision, Skanect has been criticized for low resolution and reliance on outside variables like a fast internet connection and a better-than-average graphics card.

Skanect is entirely free if you’re using it non-commercially, which makes it ideal for any hobbyist with a budget. If used professionally, the one-time licensing cost of $129 is nothing compared to some other apps around.

Scanekt’s popularity also comes from its high compatibility with just about any 3D scanner hardware, including the Xbox Kinect. Beginners to 3D scanner and photogrammetry software have also praised its easy learning curve.

If you need to focus on a project with higher resolution, however, your RAM space would be better spent on a higher-powered software like Meshroom.

Another great choice for photogrammetry software that won’t break the bank is Meshroom, an open-source 3D scanner and reconstruction app designed as an optional upgrade to AliceVision, from which it was designed.

While not fully approachable by newcomers at first, Meshroom’s somewhat steep learning curve shouldn’t be too much of an issue for beginners thanks to their step-by-step tutorial available here.

Meshroom’s advanced editing and reconstruction features are known for their highly precise manipulation features. Each phase of editing a scan can be returned to and reviewed at your leisure.

The only real downside to Meshroom is its lack of real power, as it can become quite slow and cumbersome if multiple scans are being edited at once. Unfortunately, you will need to look elsewhere if you need to do anything complicated or quickly.

Recfusion Pro is a photogrammetry software designed mainly for making 3D models of objects and people to be recreated as 3D printed replicas. This includes ‘3D selfies’ and other fun ways to use your 3D printer.

Recfusion is a powerful and highly compatible 3D scanner app that will work with just about any 3D scanner, including depth scanners like the Kinect. This means you can get extremely accurate models to recreate anything or anyone as precisely as possible.

Also capable of handling multiple scanners at once, Recfusion is one of the most powerful 3D scanner tools available, and can be used to recreate just about anything. It’s perfect for making small versions of your favorite vehicle or a 3D tableau of your family and friends.

For more practical uses, Recfusion can be made to inspect or manipulate just about anything in impressive detail. There are two versions, however, and the one capable of running multiple scanners at once costs more than the standard version.

To use multiple scanners for maximum accuracy, it will cost you €599, roughly $700.

Despite its capabilities, Recfusion Pro is very easy to use. While it will take newcomers a little more time to get used to everything, the layout and user interface are streamlined and easy to navigate.

MicMac is another open-source photogrammetry software that is remarkably impressive given that it’s free. Created by the French National Geographic Institute, it was designed initially as a large-scale scanner app to measure the impact of human actions on the environment.

That’s not to say that it’s unfit for casual use, as it’s just as handy for rendering smaller objects as it is for large projects like architecture or interior design.

While it is impressive, MicMac may be very daunting for beginners or those of you who only want a simple scanner software for the most basic of uses. If this is the case, then you’ll find the learning curve and massively complex capabilities of MicMac too overwhelming.

If you’re a beginner or intermediate user who doesn’t need that kind of power or doesn’t want something too flashy, then you’re better off going for Skanect or similar software that doesn’t have too steep a learning curve.

Elcovision is one of the oldest examples of photogrammetry software around. Founded in 1986, it has been praised for being able to read just about any image format available.

By using manipulatable point clouds, scans rendered using Elcovision can be made to highly detailed specifications. Effectively, you can create a 3D model right down to an exact pixel to create a mesh cloud of just about anything.

Naturally, having that kind of control is overwhelming to those of you who only need general scans for simple projects like replicating an object with 3D printing. While Elcovision is a personal favorite of mine, it’s not for those of you who want something a bit more basic.

If you need 3D scanner software for professional uses that won’t skimp on the power, iWitnessPro is the confusingly named photogrammetry software for you.

Not only is it capable of highly detailed renders and an impressive speed even with the most complex projects, iWitnessPro is easy enough to use that it makes for a great teaching tool.

With a carefully curated system, iWitnessPro is known for its reliability, and can convert and communicate with CAD software quickly and without lag.

Related 3D scanning articles you may be interested in: