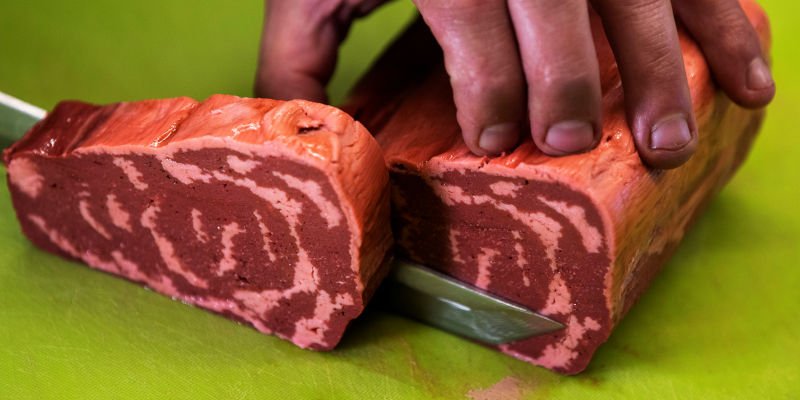 As technology companies battle to become industry leaders for 3D printed meat, the competition could revolutionize the way we consume meat products in the future.

With the breeding of animals for meat being responsible for one third of the planet’s consumption of fresh water, taking up 45% of the earth’s surface and causing extensive species extinction and deforestation, 3D printing could be the solution we have been searching for.

Therefore, due to the huge environmental benefits an alternative meat production method could provide, much interest has been taken in 3D printing meat and its feasibility.

While 3D printed meat has been possible for years, the industry is still in its infancy. However, with several exciting breakthroughs occurring within the last few years, we looked into how 3D printing meat works, and where it could go in the future

Part 1: 3D Printed Meat- The History and the Science

Both vegetarianism and veganism have been on the rise for many years, leading companies to innovate meat-free alternatives to meet the growing demand. Especially important in convincing certain people to make changes is the necessity for those products to look, smell and taste like the real thing. That is where 3D printing comes in.

The 3D printing of food was first conceptualized in the mid 2000’s by a group of students at Cornell University in the USA. For many years you could only buy industrial 3D printers that were large and bulky, but in 2006, they used [email protected], the first multi material 3D printer available to the public, to print a variety of foods, including chocolate, cookie dough and cheese.

The technology was limited, being almost exclusively used for a narrow selection of printable products, mainly chocolate, due to it being easy to melt, mold and reform. This led to the release of the Choc Edge in 2012, the first commercially available chocolate 3D printer.

How does 3D printed meat work and what is it made from?

On the surface, the idea of 3D printed vegan meat may sound unappealing, but in reality, the meat 3D printing process is both organic and extremely simple. The most advanced method — used by most pioneers in the industry — involves breaking down the structure of meat into three main components: blood, fat, and muscle. Each component is then engineered using a mixture of plant-based extracts and natural flavorings and colors that mimic the real thing.

These mixtures are then cooled and formed into a puree which is fed into a specialized meat 3D printer. Much like the process for 3D printing plastic or metal, design software is used to calculate the optimum distribution of each of the three key components, split the meat into virtual layers, and instruct the printer on the locations and quantities of each component, each fed through a separate nozzle within the machine. Once the printing is complete, it is pressed to form a more solid structure, which can then be sliced, cooked, and served.

Manufacturing time is obviously highly dependent on the size of the product, taking a few hours at the very least, but hopes are high that 3D printed meat can reach mass market levels as the technology improves

Food tech start-ups are some of the most exciting prospects in the future of business, and could well come to dominate the industry with innovative new developments. Meat-free alternatives are a $140 billion global industry, with meat 3D printing companies set to make millions if they can bring their products to market at affordable prices.

Therefore, it is well worth looking at some of the current meat 3D printing heavyweights and what they are bringing to the table.

Novameat became the first company in the world to fully 3D print a beef steak when they achieved this feat in 2018. Based in Barcelona, Spain, founder and CEO Giuseppe Scionti started pursuing environmentally friendly meat alternatives based on his belief that the current livestock market is unsustainable.

He had spent the previous decade working as a researcher and assistant professor specializing in tissue engineering. There, he spotted the gap in the market, envisioning combining 3D printing with his background in biology.

Observing the meat substitute market, he found that consumers either had a choice of plant-based burgers that were flavored like meat, or soy products that could mimic the texture of real meat but lacked the flavor. His vision was to find a way to combine the two to create a 3D printed alternative  that was indistinguishable from real meat.

Scionti plans for their 3D printed meats to be available in supermarkets and restaurants within 5 years. Focusing on just the EU and United Kingdom in the short-term, Novameat has already paved the way for other visionaries to follow.

Redefine Meat is a promising start-up based in Israel. They have been working with scientists and professional chefs to improve the composition of 3D printed meat to make it as flavorful as possible.

Redefine Meat aim to mimic blood, fat, and muscle in their product, focusing on taste, texture, color, and smell to match real meat as closely as possible, so that it even reacts with the palate like the real thing.

The materials used in their 3D meat printing technique are formed into purees which are printed in layers. The blood is formulated to create the colour and juiciness of the meat; Redefine Meat use a mixture of natural colors and flavorings to create an authentic substitute. Fat is simulated by combining other flavorings with plant-based oils such as canola or coconut. Finally, the muscle is created through a mixture of legumes and beans such as soy, and use a powder extract to simulate the thick, chewy texture of meat muscle.

Much like Novameat, Redefine Meat aim to have their 3D printed meat product in stores worldwide as soon as possible, and given the positive response from those that have tried it to date, they certainly seem to have a promising future.

Another Israeli start-up, Aleph Farms differ from other companies by rearing authentic meat from tissue samples taken from animals. After a small biopsy, the tissue taken from the animal is grown in a broth of nutrients which allows the cells to divide and develop, building their framework organically.

In 2019, Aleph Farms made headlines by partnering with Roscosmos, the Russian government’s space program, to load vials of their meat samples into a Soyuz capsule and send them to the International Space Station. There, Russian astronauts were able to use their 3D printer, which replicated the cells within to create meat in a zero-gravity environment.

While the meat that was produced was not consumed by the astronauts, but instead sent back to Earth as proof of concept, it does indicate that with the expansion of the technology in the future, the sky is no longer the limit.

With so much hype around 3D printed meat, it is easy to get carried away and begin conceptualizing an impending meat-free world. However, there are still some issues which may slow mainstream adoption.

One major benefit is the reduction in the cost of production. Raising farm animals for meat can cost farmers thousands of pounds a year in land, feed, water, fencing, and general expenses.

In contrast, the actual cost of the plant materials needed to produce 3D printed meat is far lower than traditional meat. Industry leaders claim that the cost of growing and harvesting the plant material for 3D printing will cost significantly less than rearing livestock.

This is not the case yet, however. Redefine Meat expects to start pricing for their product at approximately £28 per kilogram, slightly higher than the traditional meat it is competing with. However, these costs are expected to radically decrease as demand rises and the technology advances.

This is an increasingly attractive proposition in an age where everyone should be mindful of the environmental impact of their actions.

Additionally, with ethical beliefs being the main reason people choose to abstain from meat consumption, slaughter-free 3D printed meat could turn vegetarians back to the table. Millions of cattle are slaughtered every year to fuel our eating habits, and 3D printing meat rather than killing for it would undoubtedly be one of humanity’s greatest ethical advances.

Meat must be kept at low temperatures until it is eaten to prevent harmful bacteria from infesting it, requiring extensive refrigeration. That cost is virtually non-existent with 3D printing.

This is because the vegetable compounds used in 3D printing meat are far more durable than traditional meat, requiring far less refrigeration and lasting far longer on shop shelves and consumer fridges before spoiling. With food waste being a serious problem across the world, longer lasting food could make a huge environmental difference.

Any new technological breakthrough is going to be expensive, and 3D printed meat is no different. As production capabilities are still low, what is produced is expensive until manufacturing levels can expand and bring down costs.

For some, the mere idea of a vegan steak, especially one made in a 3D printer, is enough to turn them off the concept completely. I can certainly attest to that after some of the conversations I’ve had recently.

Fundamentally, this is an issue of perception, and the best way to change that is through demonstration. As 3D printing meat becomes more legitimized, with more people eating and enjoying these 3D printed steaks and poultry, those views are sure to change. It might not convince people to switch to 3D printed meat entirely, but it may just open their imaginations.

Conclusion: Where could 3D printed meat go in the future?

As with all technological breakthroughs, many people wonder where it could all lead, both for the better and the worse. Though exciting, it is important to be realistic.

According to the founders of several meat 3D printing companies, 3D printed foods could become a part of our daily lives in just a few short years. Giuseppe Scionti envisions supplying meat 3D printers to supermarkets in 2021, and potentially even selling those printers to the public within a few years after. This could potentially create a market for entirely home-printed meals before long; food 3D printers capable of 3D printing pizzas can already be purchased online.

In a slightly more fantastical future, 3D printing meat in space could be a massive breakthrough in creating future space colonies. A printable and storable supply of materials to 3D print meat in space would provide durable and nutritious food for scientists and astronauts to produce on site.

As we already know what 3D printing in general is capable of, it is now possible for tools and construction materials, clothes, and now food, to all be manufactured in zero-gravity environments. Experts agree that there are few obstacles left in the way of serious extra-terrestrial exploration and colonisation. And with multiple missions to Mars currently being planned, we might soon be able to go one better.

While the possibility of living among the stars is a dream for far in the future, what is unclear is how soon that future will arrive. What is more apparent is that 3D printed meat certainly is the future of food.