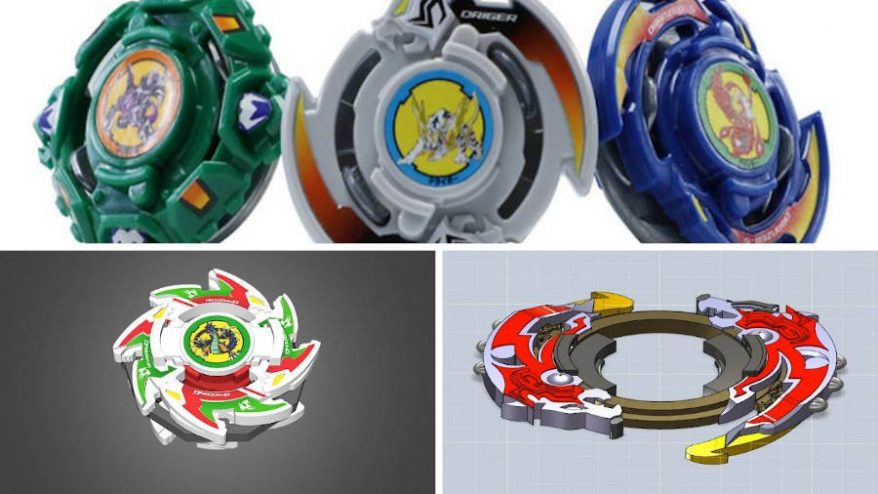 Never underestimate the power of nostalgia, especially with those of us who grew up in the 1990’s. ‘90s babies will likely not be surprised that the idea of a 3D printed Beyblade already exists, with its immense popularity and legions of fans, it was only a matter of time before people looked into how to 3D print a Beyblade with devoted gusto.

The ‘90s brought its fair share of surprises, not the least of which was the western world’s embracing of Japanese cultural exports. Beginning arguably with Pokémon, an entire generation became infatuated with anime, JRPGs, and the toys and collectibles that came with them.

Beyblades were a late entry to this craze, arriving just before the turn of the millennium, but that doesn’t mean fans of all ages weren’t as eager to pick up and play. As the audience grew up, so did technology, and the idea of a 3D printed Beyblade did not take long to appear.

From recreating spinners from the original series, to 3D printed Beyblade Burst favorites, we’re going to look at some of the coolest Beyblade models to 3D print at home.

While many tournaments and competitions don’t allow custom or DIY Beyblades, making your own Beyblade can come with a feeling of pride even if not used in competitive circuits.

There are even groups out there looking to make special tournaments for DIY and 3D printed Beyblades, so any you make yourself could end up winning you a trophy someday!

The Dragoon Beyblade – The New Spin on an Old Classic

Starting with a personal favorite, the Dragoon – wielded by original series protagonist Tyson Granger – is an iconic spinner available as a 3D printed Beyblade model.

As with many anime weapons, the Dragoon has seen some changes over the seasons. While the basic look is the same, several models from across the show’s long history are available to download and print.

With some carefully placed decals, you can make the Dragoon look just the way it did in the series, or put your own spin on it to make it fully yours.

Find the free files here to bring this classic to life.

The Dragoon G was the first of its kind as a left-spin Beyblade. Popular through its appearance in G-Revolution, it’s known for its short burst of speed after launch for a chance at a quick victory.

The red and green design is a fan favorite, but some have opted to give it the royal blue and red treatment of its predecessor to make a truly evolved-looking 3D printed Beyblade model.

It’s not just full Beyblades that can be made at home, 3D printed Beyblade Burst layers are available to fit the Dragoon Beyblade too.

The elegant design adds an edge to the Dragoon to recreate the strength and durability of the Burst generation Beyblades, perfect for a cool aesthetic and a stronger spin.

3D printed Beyblade Burst models are popular with fans of all ages. With their updated and changeable designs, files are everywhere to load new tops to your Beyblade to change how it spins.

This design, born from a parent’s wish to give their child a unique gift, is free to download, so you can make your own 3D printed Beyblade Burst spinning top that works with most launchers.

The design also comes with various toppers and can be altered by flipping the file to suit left-handed players. It has even been upgraded since the original upload to be stronger and last longer.

The Driger has come in many different forms over the years of the series, as wielder Ray Kon has upgraded many times over the competitive series.

The simplest of these, the Driger Slash (or Driger S), is an easy way to learn how to 3D print a Beyblade due to its basic design and well-tested print files.

Included in this link is a scan of the stickers to decorate the finished product, though it does not include an attack ring. Though it can be fitted with any attack ring, 3D printed or not, to create a design more unique to the wielder.

For fans of the later series’ ouroboros-inspired design will be glad to know that the Driger GT attack ring is also available as a 3D printed Beyblade model.

Made for the competitive circuit, a new and upgraded attack ring is a necessity for anyone looking to compete, but also a great 3D printed Beyblade addition for those who want arguably one of the coolest designs of the series.

Original series Salima’s Cyber Driger may be less recognizable than the others, but its usability is not to be denied. As a 3D printed Beyblade, it’s a good choice for people who want to compete.

The toothed design makes it formidable against other models, and the designer has reinforced the model so it’s much more durable than it appears.

Fans of the original series will also be happy to know that this design includes both the original look for collectors, and the upgraded battle-ready version for 3D printing your own competitive edge.

The 3D printed Beyblade Burst Dranzer Spiral is one of the coolest of the later generation models.

This model, full name the Dranzer Spiral Spread Trans, was wielded by Kai Hiwatari. As one of the most popular and long-running protagonists, it’s no surprise that one of the coolest designs went to him.

Like the character, this 3D printed Beyblade burst model is a favorite among fans, and available as a fully printable and usable spinner.

Because this is a fully 3D printed Beyblade, it requires a lot of post-print engineering and care to ensure strength and usability. Overall, this model is durable and open to changes to fit different rings or accommodate left-handed users.

For those more nostalgic for the early days of Kai’s on-screen legacy, there is also this 3D printed Dranzer Beyblade attack ring to be fitted to any model for more of the attack power that made the original model famous.

The dimensions are designed to fit any first-generation Beyblade, but can be altered to suit any model.

This early model is the first from the designer, who has encouraged people to reach out with questions on printing, tweaking, and future upgrades.

What good is any 3D printed Beyblade without a good launcher? They look cool, of course, but it’s always good to have a way to use them.

At least as far as the show is concerned, Beyblades are weapons. And what better way to emphasize than with this 3D printed Beyblade katana launcher?

This launcher is available in three styles, depending on how strong you want the grip to be, so experimentation is recommended.

Whatever your use, it can’t be denied that this is one of the coolest Beyblade launchers around.

This 3D printed Beyblade launcher is deigned to be usable by both left and right handed players, so everyone can use it!

The dual launcher is especially useful as a shared launcher for co-op partners of different dexterities, but the design itself is sleek enough to suit singles players of either preferred hand too.

Not all Beyblade duels are one on one, or at least they don’t have to be. With the Twin Launcher, two Beyblades can be loaded in at once for shortened reload times or successive releases.

The files are available for tweaking to match different Beyblades. Once you’re happy with the results, you’ll find the twin launcher adds a new dimension to your duels.

This launcher attachment requires a little more engineering than the others, but the design remains simple.

The 3D printed Beyblade Burst grip handle is designed to be comfortable and strong through longer games and tournaments without skimping on the power. Download it here.