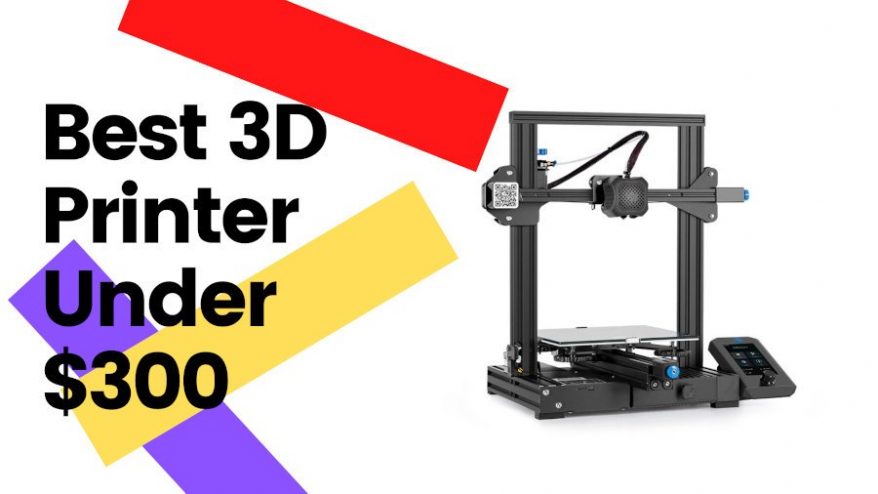 Before the RepRap movement, 3D printers cost upwards of $15,000 and were mostly used in universities and large companies for rapid prototyping, like in the automotive sector.

When the RepRap team managed to put out 3D printer plans you build build at home for a few hundred dollars back in the late 2000s, the whole industry was turned completely on its head overnight. This paved the road for all the advances we’ve had since then, making 3D printing more accessible than ever before.

We’re not quite at a stage where 3D printers are in every home like computers or smartphones, but you can now get a great 3D printer for under $300. With so many options out there, we’ve narrowed it down to 5 top $300 3D printers. But first, here’s what you can expect from a 3D printer under $300.

$300 3D printers almost always feature an open print area rather than a built-in enclosure — though some can be fitted with enclosures — are often 3D printer kits you need to build yourself, and are mostly restricted to filaments like ABS, PLA and TPU.

However, there are still some really effective low cost 3D printers for $300 on the market right now, famed for their reliability and workhorse qualities. We’ve listed some of our top recommendations below.

As the world’s current most popular 3D printer under $300, the Ender 3 has really made its mark as an affordable printer suitable for hobbyists and home makers across the world.

Its combination of good build volume size, precise printing, reliability and upgradeability has won it legions of fans worldwide, with Creality upgrading a few parts for the newer Ender 3 V2.

The changes are subtle but make for a steadily improved 3D printer that costs less than $300 still, despite being more than $50 more than the original Ender 3. Perhaps most notably, the firmware has been overhauled for a more powerful, yet quieter, 3D printing experience.

Known for its reliability in a price range where most 3D printers fail prints often and break, the Ender 3 can’t do many things that $500 or $2,000 3D printers can, but what it does do, it does well. It can print basic models in PLA and other simpler filaments effectively, precisely, and consistently.

Other notable features are the carborundum glass build plate that makes finished prints easier to remove once finished, and improves adhesion during the printing process. The 4.3-inch color touchscreen is a nice touch that many will appreciate, and overall, if you want piece of mind and a reliable printing experience in one of the best 3D printers under $300, the Ender 3 V2 is for you.

Anycubic’s newest Photon range features the Mono and the Mono X, offering vastly increased print speed and a host of other improvements on previous Photon models.

The only resin printer on our best 3D printer under $300 list, the Photon Mono brings low-cost LCD 3D printing to your desktop, offering high quality resin printing for miniatures and other precise models using its 2K LCD screen.

With print speeds of up to 50mm/h it’s up to 2.5x faster than the original Photon printers, with other key improvements including a more stable z-axis via its dual linear slide for super smooth surface finishes on models with difficult to spot layer lines.

Overall, for a resin 3D printer it’s one of the best 3D printers under $300, and for hobbyists looking to create precise and intricate miniatures, it can’t be beaten for the price.

See also: our buyer’s guide for the best 3D printers for miniatures.

A delta 3D printer, the Flsun Q5 offers something a little different to the other FDM 3D printers featured on our best 3D printer under $300 ranking.

Firstly, delta printers are known for their speed, using Bowden extruders with lighter print heads that can move faster without losing print quality. The Q5 offers good print volume too, with 200 mm across each axis housed in a compact metal shell that will fit on most desktops.

The Q5 can be built in around 30 minutes, and the auto leveling and setup are really simple. The touchscreen is easy to use so you can easily access mid-print data as well as other options, and printer comes with print resuming features so if you have a power cut your model isn’t ruined.

The glass lattice bed is also a nice touch. The circular glass bed makes for easier and stronger adhesion to the print surface, as well as making it easier to remove PLA or other filament prints afterwards without having to scrape hard and damage your models. Overall, it’s one of the best 3D printers under $300, and a great option if you’re fond of delta printers.

Possibly the easiest 3D printer kit to build in its price range, the Anycubic Mega S can be built with just a few screws and cables — even the greenest beginners should have no problem building their own.

This simplicity is key in a 3D printer under $300, with most hobbyists looking for a hassle-free 3D printing experience where their 3D printer doesn’t break down every five minutes, and just prints consistently and reliably. The Mega S is that printer, featuring everything you need to print without hassle — and not much else. Barebones yet reliable, it’s built with a sturdy and stable metal structure to prevent the vibrations from printing causing shaky lines in the print.

The 210 x 210 x 205 mm print volume should be enough for most hobbyist projects, and if you’re a small business looking to get started with rapid prototyping on basic materials like PLA, ABS or TPU, the Mega S should work for smaller parts.

All Mega models feature Anycubic’s patented Ultrabase print surface which makes for better adhesion — creating stronger and less error-prone prints — as well as making them easier to remove when finished, so you won’t need to scrape around and potentially damage your print while trying to remove it.

As with most 3D printers under $300, it has a basic touchscreen, offers good precision, and if you want to get more ambitious, you should also be able to 3D print wood filaments, PETG, and HIPS. Overall, it’s a reliable and consistent $300 3D printer.

You could easily take a look at the stats and compare them to say, the Ender 3 V2 or Anycubic Mega S, and dismiss it. It has a far smaller build area, and it’s more expensive? We hear you say.

Yes, but build volume is restricted because it’s an enclosed 3D printer, a rarity in a 3D printer under $300, which comes with many advantages. An enclosure makes for far better temperature maintaining while printing, especially useful for printing filaments like ABS, as slowing down the cooling of parts prevents warping and cracking of parts that can render your finished models useless.

So, if you’re not looking for a huge 3D printer, but rather a smaller 3D printer you can trust to print models in ABS that don’t crack under pressure, the Flashforge Adventurer 3 Lite could be the one for you.

It can print a variety of types of PLA filament, as well as ABS, and metal or wood-filled filaments. The 150 mm print area and cubic design makes it a neat machine that can fit on most desktops, and it’s simple to use with the full-color touchscreen.

The heated bed can be easily removed for easy removal of finished prints, and it’s quiet, for those who want to run it overnight on larger or more complex 3D printer projects. Overall, if you’re looking for an enclosed 3D printer, it’s certainly one of the best 3D printers for under $300. 52 Cool 3D Printed Cookie Cutters You Can Print At Home