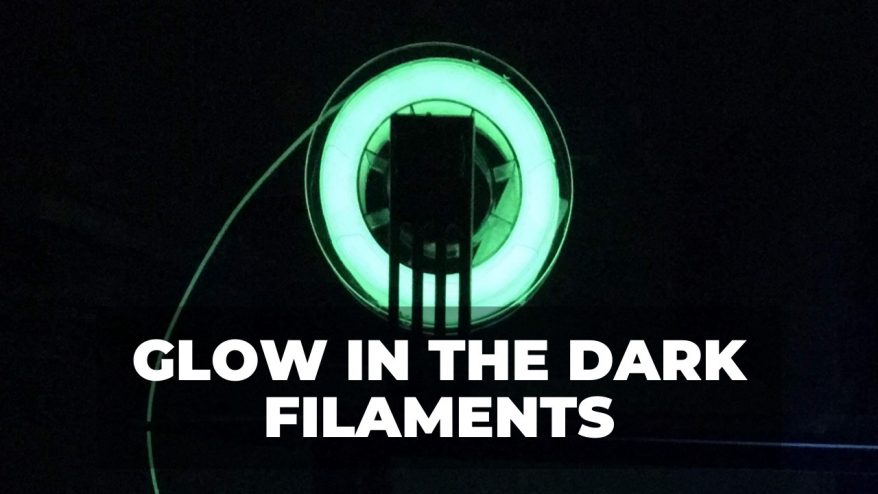 I think I was one of the few kids in my school who didn’t have those glow in the dark stars and moons adorning his bedroom ceiling. Despite not having the pleasure of the luminous heavens to see myself, they still give me a warm nostalgic feeling primarily thanks to sleepovers.

As a child, glow in the dark things are like magic, and it’s almost disappointing to learn that there’s a science to it. But that doesn’t mean we can’t use glow in the dark filaments to recreate that same wonder.

Glow in the dark PLA and other filaments are generally known as specialty filaments, meaning they are like generic 3D printing materials, but with additives to improve the aesthetic.

This has been done to give filaments new colors as well as properties like conductivity, stone-like finishes, and, as we’ll be discussing today, phosphorescence.

What is Glow in the Dark Filament?

Glow in the dark filaments aren’t as complicated as you might think. They’re simply 3D printer filaments that have been treated or blended with additional phosphorescent materials to make them glow in the dark.

These materials are normally highly luminous like strontium aluminate powder for a classic brightening look, or zinc and calcium sulfides for a more subtle glow.

Glow in the dark PLA and ABS are the most common kinds, but you can also find luminous PETG and TPU, though they’re normally more expensive and aren’t much different in terms of luminescence.

How to make your filaments glow in the dark

Once 3D printed, glow in the dark filaments will need to ‘charge’ (for lack of better word) by absorbing light. While you can do this with any regular light source, leaving your filaments in the sun is an equally viable (and easier) option.

Just don’t forget that luminous filaments only need light to charge, and heat will noticeably damage your prints over time. As long as you leave your projects in a bright but relatively cool environment, you’ll still get the effect you want when it’s time for lights out!

These glow in the dark filaments are perfect for toys, home décor, and (my personal favorite) Halloween decorations.

Just be advised that most glow in the dark filaments will only stay luminous for about thirty minutes even when fully charged. So don’t expect that octopus on your mantle to keep glowing through your next movie night.

How to Use Glow in the Dark Filaments

For the most part, using glow in the dark PLA and ABS is the same as printing with standard versions of these filaments. This means that your regular 3D printer should be well enough equipped to handle them, and your settings won’t need much of a tweak if any at all.

The main thing to note is that glow in the dark filaments are far more abrasive than even other specialty filaments like wood or marble PLAs. Because of this, we recommend upgrading your nozzle to a steel, or better yet, a hardened steel nozzle if you haven’t already, to help avoid clogging and damage.

How Do You Print Glow in the Dark PLA and ABS?

If using PLA, you won’t need a heated print bed, but if you have access to one then we recommend no more than around 60 – 80℃ to aid with adhesion.

If you are set on ABS, however, then a heated print bed set to around 110℃ is practically a must.

As for print speeds, the lower your setting the more reliable you can expect the print to come out. Though if you’re the impatient type like me, you’ll find that you can expect good results in speeds up to 60 – 80mm/s.

While some filaments are manageable at 100mm/s, I personally don’t recommend this due to consistently bad experiences with these speeds myself.

There might be some trial and error, though, depending on your printer and the filament you’re using, so don’t worry if you don’t get ideal results on the first try.

Does Luminous PLA Really Glow in the Dark?

It’s worth noting that most glow in the dark filaments will appear white during the day or in light. So when we talk about available colors, we’re talking about what color they are when glowing.

Luminous PLAs will glow in the dark with a brightness that changes depending on how it’s been charged. Exposure to UV light will give you the brightest shine, while sunlight will give off a more medium glow.

Charging with fluorescent or domestic light sources gives off a much weaker glow that won’t last very long. This is because the particles of light change in strength depending on the source. Compared to UV light, domestic lights are quite weak.

Think of it like a difference in wattage, the higher the charge, the brighter the light.

Overall, you should expect glow in the dark filaments to give off a bright glow for up to 10 minutes before slowly fading over the course of a further 30 – 60 minutes.

Now we’re going to look at some of these brands as well as what makes them stick out. Many glow in the dark filament suppliers also deal in other specialty filaments, so don’t be afraid to shop around for some unique and interesting materials!

Eryone Glow in the Dark PLA

Eryone is quickly becoming a well-known name in 3D printing, and this is partly thanks to their range of specialty PLAs. This range includes a high-quality glow in the dark PLA that’s as affordable as it is impressive.

Eyrone’s glow in the dark PLA has a pleasing matte finish visible during the day. While not quite to the level of silky PLAs, this is a particularly ideal trait as it means any prints will look great in both light and darkness.

At around 30 minutes, the glow time is on the lower end, though this luminous PLA glows very bright, especially if charged with UV. Though charging them with sunlight will still give you a nice glow when the lights go out.

Maybe it’s because the green glow is a little played out (mainly because that’s the easiest color for our eyes to perceive in the dark), but I prefer the blue glow in the dark PLA. It looks great, has a calming hue, and offers the same properties, printability, and price of its green counterpart.

Eryone’s Glow in the dark PLA is heavier than most PLAs, meaning it’s not quite ideal for less weighty projects like toys. So it’s mainly ideal for those of you who want phosphorescent decorations rather than playthings.

Matterhackers Glow in the Dark PLAs

Matterhackers deal in all kinds of filaments, and they have quite a hard-working glow in the dark PLA in their collection.

After a bright glow lasting around 5 minutes, it will begin to dim over time, but still emit a pleasant light lasting between 30 – 60 minutes depending on its charge. A great choice for a tough filament, Matterhackers lives up to its reliable reputation with a strong and impressively detailed finish.

Their standard glow in the dark PLA is very cheap for what you’re getting at around $21.99 – $23.99 per kilogram. But if you’ve got the cash to burn and want seamless, remarkable quality prints, you can opt for their glow in the dark PRO PLA treated with acid biopolymers to make a highly robust and incredible detailed PLA for smooth prints with an equally impressive nighttime glow.

The only real downside to these glow in the dark PLAs is that they are highly abrasive, and are recommended for use with nothing less than a hardened steel nozzle. This is bad news for those of you who have lesser printers or otherwise don’t want to fork out for what is often an expensive upgrade.

Hatchbox Glow in the Dark PLA

Hatchbox’s own glow in the dark PLAs are known for their ease of use and, like most of their filaments, very affordable price.

While Hatchbox filaments can handle higher print speeds than most others, we still recommend sticking to the lower end of this scale to ensure more high-quality results.

Fortunately, Hatchbox’s glow in the dark PLAs are not as abrasive as others, and should work with most nozzles. Though as a luminous filament, using a metal extruder is still ideal for minimizing the risk of potential damage.

They also don’t require a heated bed, so any printer with a decent extruder will be able to print these glow in the dark filaments with little to no issue.

The compromise for these easy-to-use and highly compatible PLAs is that it’s probably got the weakest glow of any other filaments on this list. While most consumers praise its usability and general quality, you may want to look elsewhere if you want something that’s going to light up your room.

This isn’t entirely a downside, however. Remember those glow in the dark stars and moons I mentioned before? These are often deliberately made with zinc or carbon sulfates to give them a softer glow.

This is because they’re designed mainly for bedrooms, and a brighter glow would make it difficult to fall asleep. This makes Hatchbox’s glow in the dark PLA ideal for those of you who want a softer shine rather than a brilliant light.

It’s not just FDM printers that get to have all the fun. Liqcreate’s glow in the dark resins are among the first, and best, luminous resins for SLA printing.

While on the expensive side, they are incredibly brilliant with a shine lasting up to 4 hours when fully charged. These resins will work with just about any resin printer, and their incredible phosphorescence will not disappoint.

Adding this to resin’s notably high-resolution prints when compared to standard FDM filaments, and you’ve got a winner in my book.

If you prefer SLA printing and don’t mind the extra cost for a glow in the dark material that’s arguably leagues above its FDM counterparts, then Liqcreate’s Hazard Glow Resin is exactly what you’re looking for.