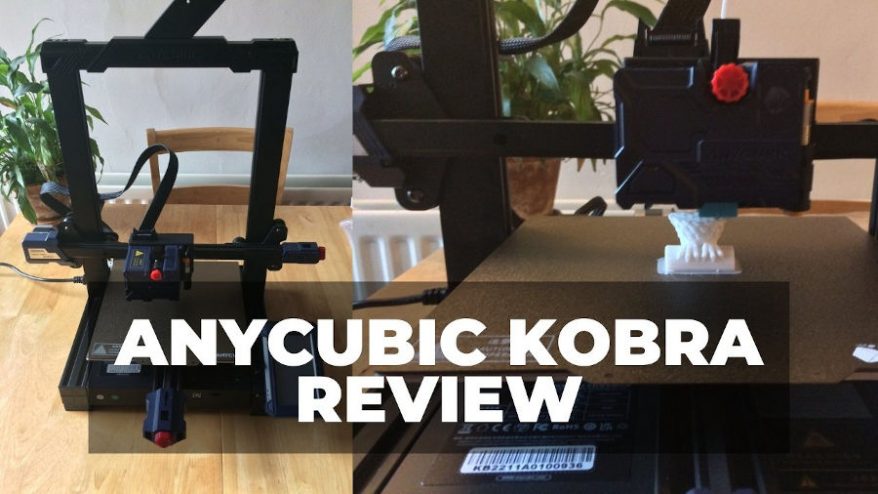 Anycubic’s latest serpentine-themed FDM printer is here – the Anycubic Kobra. The company kindly shipped us a pre-release copy to get an early sense of what its latest fangy little printer can do.

Priced at just shy of $300, sporting auto-bed leveling, a good-sized print bed, a removable magnetic print bed, and minimal assembly, is the Anycubic Kobra yet another passable Ender 3 alternative, or the next must-have budget printer?

We had recently tested the Anycubic Vyper, and were impressed with its simplicity and auto-leveling.

Read on to find out why despite some early frustrations, we’ve grown to love the Anycubic Kobra.

The Anycubic Kobra arrived semi-assembled, nestled in three hulking layers of protective foam with cut-outs for each part. Thank goodness in our case, as our model journeyed from Hong Kong to the UK, weathering a custom’s stop and delivery to the wrong address before finally arriving.

The full-color assembly instructions are clear and concise, with just the right amount of handholding to guide beginners but not make seasoned DIYers feel they’re being taken for a fool.

In under 20 minutes, we fused the gantry to the base, plugged in the wiring for the stepper motors and print head, screwed on the touch screen and spool holder, and tidied up cabling as instructed. Anycubic then walked us through a brief maintenance check, covering potential shipping-induced printhead and bed wobble and belt adjustment via the tensioners.

With Anycubic Kobra pieced together, a few appealing points stand out. The build quality is high throughout. The all-metal frame, extrusions, and gantry, the high-quality injection molded parts, and chunky, rubber shock-absorbing feet make for a sturdy machine. The attention to detail is apparent throughout. It’s a compact, sharp, and stylish printer.

With the Anycubic Kobra primed and ready for action, we started it up for the first time, triggering a chirpy little tune. The 4.3″ color touch screen sits on the front right of the printer for easy access, setting adjustments, and print triggering. A clean UI and smooth, responsive navigation make it a joy to use, powered by a 32-bit motherboard. Anycubic doesn’t overwhelm with options, and the directory is laid out logically.

On to calibration. Anycubic’s shiny new patented 25-point LeviQ process and BLTouch-style probe worked their magic, taking no more than a few minutes before asking us to set the z offset manually. The process involves sliding a sheet of paper under the nozzle lowering it via the touch screen until you feel a light tug. If only bed leveling was this quick, reliable, and pleasant on all printers.

Next up is filament loading. The spool holder sits atop the gantry, well placed to feed the extruder from above. Three taps on the touch screen and the Kobra sets to work, upping the extruder to the target temperature. The extruder and bed heat up very fast, hitting 200°C and 100°C respectively in under two minutes. Another tap, and the extruder gear springs to life.

Anycubic recommends cutting the filament at a 45° angle before feeding it in, but we found that a more extreme cut is better. Although the filament path and the spring clasp are well designed, we did have to, at times, gently rotate and prod the filament for the gear to find some purchase and latch on. A minor irritant, the subtleties of which you’ll come to understand after some time with the printer.

The Anycubic Kobra comes with Cura 4.2.1 installation files for Windows and macOS on the USB stick. Why 4.2.1 and not a more recent version? Your guess is as good as ours.

Although Anycubic provided us with Cura parameter profiles for PLA, ABS, and TPU, there’s no Kobra printer profile. We had to create a custom one instead, then key in the Kobra’s main specifications.

It’s disappointing, to say the least, leaving us to tinker and fine-tune to find the optimum settings, Not exactly in keeping with the user-friendly appeal of the hardware. We hope this is just an early review model quirk and the company provides a Cura printer profile for the Anycubic Kobra’s consumer launch.

These issues aside, Anycubic chose wisely with Cura, our favorite among third-party slicers, thanks to an intuitive interface and plenty of depth to the trove of settings it offers. You can offline print via SD card or pair up the Kobra to Cura or other third-party slicers via USB.

To start, we printed the owl file loaded onto the SD Card that ships with the printer, sticking to the PLA profile provided by Anycubic.

We were impressed by the print’s clean layering, sharp details, and overall solid finish, as expected from an example print optimized to highlight the printer’s strength. The printer only struggled with the upper layers, creating some unsightly blobs on the ears.

In action, the Anycubic Kobra’s silent stepper motors are near audible, if only because any sound they do make is hidden by the rather loud din produced by the fans. Something that intensified when heating the extruder/bed, at which point the fans make a worrying, churning sound that audibly surged in decibel count before quietening down within 30 seconds or so.

Confident, we pivoted to a three-part Minecraft Creeper model. The reasonably complex surface made of slightly overhanging cubes rendered well. The dimensional accuracy was on point, the head swiveling as intended by the designer. Much like the owl, there was some roughness on the top layer, but overall a strong showing.

Next, we set the Kobra upon the classic 3D printing Benchy test. The printer struggled with the arches on the cabin, coughing up layering issues and imperfections here and there. This is a stress test, so we weren’t overly concerned as the Benchy was decent, but there was plenty of room for improvement here.

Note: the issues we had are fixable by updating to the latest version of Cura, and by tweaking the slicer settings. When we were shipped the Kobra (before release) there was no Anycubic Kobra Cura profile, but this may change on release, and once we tweaked the settings, results were very good.

We will keep this article updated with info on when the Kobra Cura profile will release.

From here, our experience with the Anycubic Kobra took a frustrating turn for the worse. Whatever we threw at it, the printer produced an array of failures, errors, excess stringing, first layer adhesion problems, hot end leakage, and, if prints finished successfully, poor quality results.

A print of the PolyPearl Tower Torture Test crashed and burned after laying down the base. Less complex models such as a miniature ghost and base for a Hollow Knight model fared better but had so many issues they were hardly worth keeping. Out of sheer frustration, we printed a simple, high-poly fox, which came out great except, once again, for some last layer imperfections.

This reassured us that the Kobra had some printing pep under the hood, and the initial successes weren’t a fluke. After hours of troubleshooting and dozens of print tests, we got to the root of the problem: the provided Cura profile is woefully inadequate, defined by poor retraction, infill, temperature, and support settings.

Our first port of call was to upgrade to the latest version of Cura, 4.13.1, one of the single best decisions we made when testing the Anycubic Kobra. Then, we got to work honing in the settings. This came to define our time with the Kobra; tinkering, tuning, adjusting, all in search of a profile that should have shipped with the machine.

For reasons beyond us, we noticed that the leveling and z offset shifts between prints, coughing up wildly inconsistent results printing the same part, model, or object in quick succession. We opted to level the bed before each print from here onwards, which resolved the issue.

As for first layer adhesion issues, settings helped, as did instructing Cura to create a multi-line skirt to purge any pre-print filament accumulation on the nozzle, something the Kobra seems particularly prone to. We also found that wiping the nozzle at just the right moment a mere seconds before starting a print helped with depositing a clean and consistent first layer.

Satisfied with a stable profile and more attuned to the Kobra’s quirks, we worked our way to a successful PolyPearl Tower Torture Test, proving that the printer can perform beautifully. We also put it through its paces with a general stress test that left us indifferent with illegible lettering but decent bridging, overhangs, and supports. Still, work to be done.

At this point, queue a lengthy montage of further software tinkering and countless attempts, culminating in a far superior Benchy, an impressive Hollow Knight model, and a good quality large multi-part King Boo model. It took time and effort, but the Anycubic Kobra created some superb prints for us.

There’s a fine line between love and hate. It’s one we straddled throughout our time with the Anycubic Kobra.

At times, it embodied everything we’d want from an affordable entry-level printer glistening with usability features such as the excellent bed leveling, removable magnetic bed, and sleek touch screen. Then, things would turn sour with failed prints, inconsistent results, and endless scrolls through slicer settings to find potential culprits.

Don’t get us wrong; the Anycubic Kobra is a solid printer capable of superb quality prints for the price, but its idiosyncrasies require a sometimes obtuse set of maneuvers to perform at its best. Like its namesake, it has fangs, but sharpening them isn’t always easy. Rather fittingly, the Kobra needs charming.

After roughly four weeks with the Anycubic Kobra, tailoring the Cura profile, leveling the bed before each print, and pinpointing the right moment to wipe the nozzle before the first layer goes down, we’ve ultimately grown to love this temperamental printer that positively brims with potential.

As long as you’re willing to get to grips with its quirks, the Anycubic Kobra is an affordable option for beginners or seasoned makers looking for a user-friendly Ender 3 alternative.