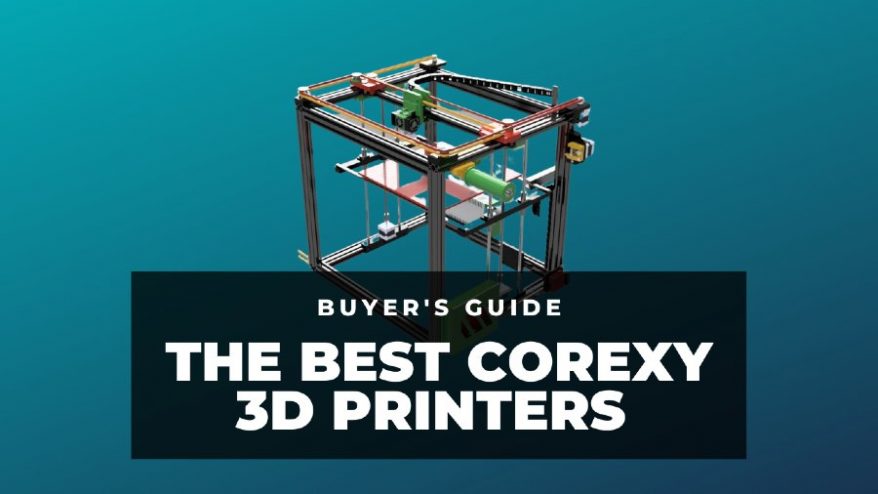 Known for speed and precision, CoreXY 3D printers are some of the most powerful (and affordable) FDM printers.

With FDM 3D printers largely accounting for the multi-billion dollar growth in the 3D printer market, it’s safe to assume that the CoreXY 3D printing system is reaping the benefits of this attention.

But how do they differ from standard FDM builds?

Aside from their speed and precision, CoreXY printers employ an innovative design consisting of belts that control the printer head (and in some cases even printer beds!), giving them productivity-boosting features like a stationary gantry system and motorized X and Y axes.

If you’re ready to take a deep dive into the best CoreXY 3D printer kits, then keep reading as we explore the technology behind CoreXY printers, their advantages, disadvantages, and take a look at the top CoreXY 3D printers on the market and who they work for best!

What is a CoreXY 3D Printer?

If you’re looking to invest in an FDM 3D printer, the most popular style is a Cartesian printer, and it’s within that subset we find the CoreXY system. Now, CoreXY is technically a form of Cartesian 3D printer, but you’ll often find comparisons of the two and that’s because of CoreXY’s unique design.

For more info: read our guide to the 4 main types of FDM printers.

CoreXY is a 3D printing system that was developed by an MIT engineer in 2013. These printers are typically cube-shaped and consist of belts that operate using stepper motors to move the printer head along the X and Y axes. In this case, the printer head is the only object actually moving with any significant speed.

With CoreXY 3D printing systems, there’s less opportunity for the gantry system to move. This decreases the chance of excess vibration, which if you’ve ever used a 3D printer before you know too much vibration can lead to side effects like ringing and ghosting. This isn’t to say it never happens, but it’s less likely to.

Higher-end CoreXY models also often come with enclosures made from a variety of materials like plastics, acrylics, and fiberglass. This helps regulate the temperature when printing your models.

The overall result of this technology is increased space efficiency, speed, stability, and accuracy.

Understanding what CoreXY printers are is only half the battle, now it’s time to compare. Ranking from lowest to the highest price, here are our top CoreXY 3D printers.

From the trusted global developers at Tronxy comes the X5SA, which proves to be one of the fairest priced CoreXY printers on the market.

With a build volume almost twice as much as the Sapphire Pro, the X5SA comes with assisted-manual bed leveling, where it helps support manual bed leveling by showing off-level areas. The bed is also 24V powered and produces a nice even heating across the surface.

The printer supports laser engraving, an integrated Y-axis guide rail, a double screw motor on the Z-axis, open-source Malin Firmware, and uses the same Bowden extruder as above.

What gives the X5SA its popularity is its customization. You may not get much use out of it on its own, but it’s become a favorite amongst printers who enjoy being able to customize their printer with out-of-the-box modifications, like the coated glass bed. On Tronxy’s site, you can even find an X5SA upgrade kit.

Beginners may find setting up and upgrading this printer daunting, as it’s not the easiest, but experienced hobbyists and professionals will love the price and modification support this printer holds.

Founded in 2017, Two Trees set out to fill the gap in the market to deliver performance, affordability, and user-friendly assembly all in one printer, and that message still rings true today with the Sapphire Pro.

The Sapphire Pro boasts a number of high-end features for minimal costs, like automatic bed leveling and precision linear rails for the X and Y axes, which help reduce wear over time and create smooth applications.

That’s not all that keeps this printer in the limelight.

It also has a smart power failure detector, so it stops and picks up right where you left off in case of outages, twin turbofans for fast setting of the printed model, a dual-drive Bowden extruder, and a Makerbase MKS 32-bit Robin Nano control board. The printer comes easy to set up and ready to print. You may have to finagle a few settings to achieve the desired effect, but overall, it’s a solid printer for a solid cost.

While this printer is an excellent choice for every user (and every wallet), we really believe this to be the industry standard entry-level CoreXY printer, and perfect for anyone looking to break into the community.

Dubbed the “3D printing industry evangelist”, Creality aims to bring the convenience of technology to everyone, and their midrange Ender 6 3D printer does the job nicely.

Nestled between the Ender-5 Pro and the CR-10 series, this semi-enclosed printer promises to be the fastest and most intelligent one of the series yet. With removable enclosures, as well as an optional top plate for full enclosure, this printer lets you stabilize temperature-sensitive filaments more efficiently.

It has a print speed of up to 150mm/s, and uses the Carborundum glass platform, with similar properties to Anycubic’s Ultrabase platform, giving you ultra-smooth layers.

The Ender- 6 comes with a custom-built, imported, ultra-silent TMC motion controller from Germany, and the TMC-2208 motherboard ensures tranquil silent movement. It also comes with a large 4.3-inch color touchscreen. Although it is manual bed leveling, you can accessorize it with an automatic bed leveling probe for assistance.

The large community surrounding Creality also comes in handy, creating powerful mods as well as offering amazing support. Partnered with the online tutorials and detailed guide, you’ll have this printer assembled in no time.

All in all, the Ender 6 is one of the best technological upgrades for mid-range printers and is best for those looking for optimized speeds at a bargain.

Made by engineers for true home micro-manufacturing, Voron started back in 2015 under the belief that a 3D printer should be uncompromised, fun to assemble, and a joy to use.

And that brings us to today with the Voron 2.4.

This is a nice entry-level printer into the high-end spectrum that boasts a plethora of possibilities. Not only is it pleasing to look at, but it offers unique features like opting for a stationary bed and linear rails on all three axes to help cut down on vibrations.

The engineers were serious when they said a printer should be fun to assemble, taking DIY CoreXY 3D printers to the next level. In this almost meta process, you’ll need a 3D printer to build this fully open-sourced DIY printer.

The company website has fantastic schematics, so you know exactly what you need, but to get this printer you’ll have to embark on a search for all the parts. However, it does have a zealous community eager to welcome newcomers and help them get started sourcing and building the parts for this printer. The website also has materials itself, like the Bowden drive and printer bed, or you can order bundle kits from third-party sellers at your own risk.

If you go for the kit, each size comes including a 32-bit BTT Octopus mainboard, a Raspberry Pi controller to run Octoprint, a heated chamber, as well as most necessities for the printer.

This printer is definitely an experience, and not for the light-hearted, but if you’re up to the task, you’ll find immense joy in this community and the process of building the Voron 2.4 that’s as unique as your own fingerprints.

Another Creality special on this list and it’s the slightly more exuberant model, the CR-30.

What first catches your attention about this printer is not only its sleekness but its obvious revolutionary design. While most CoreXY printers are cubic, the CR-30 is triangular with an infinite Z-axis.

The printer bed runs like a treadmill, or a rolling conveyor belt, which promises to increase productivity, cost-efficiency, and save time. There’s even an extension bracket you can add on for printing extra-long models. It has a Nylon-based heated bed that’s easy to replace and has excellent adhesion.

To combat logistical setbacks, its printer head sits at a 45-degree angle. While they keep certain specs under wraps, from what we can tell, the printer comes with an ultra-silent motherboard and silent chip, which seems reminiscent of the Ender 6 specs. Its infinite Z-axis has the capability to make this printer a manufacturing powerhouse, and don’t worry, the revolving belt comes already leveled.

Overall, we recommend this printer for users looking to boost productivity and take advantage of the extra-long printing capability for models.

The last price on this list may be jarring, but it’s not without merit.

Coming in 2 sizes, this open-source printer comes with all the fixings of a seamless 3D printing experience. A wireless-capable 32-bit board, auto bed and gantry leveling, dual-gear extruder, linear guides, and silent stepper motors are just a few of the features that make the Troodon worth the price.

With a hot end and heated bed reaching 275 degrees and 150 degrees respectively along with its enclosed build area, you can manage temperature-sensitive filaments with ease. Striking inspiration from the Voron, it too uses a belt on the Z-axis to decrease wobbling.

Unlike the others on this list, it comes completely assembled, ready to print out-of-the-box. And while it supports modification, it creates amazing prints as is. Vivedino’s Troodon printer is for those willing to spend a little extra for massive convenience.

Meg's a freelance writer and CNC hobbyist who enjoys tinkering with 3D printers as well as laser engravers in creative pursuits. Her interests lie less in DIY and focus more on applications that highlight useability and intuitive interactions, so you'll find her fawning over the latest Prusa 3D printers and putting "beginner-friendly" platforms to the test.