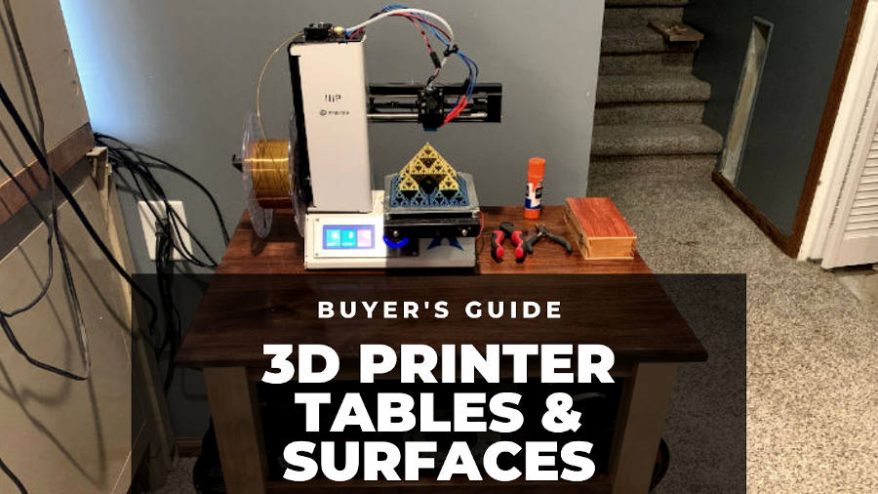 There’s something about buying new tech that makes us want to give it the perfect place to sit. Every new phone comes with wondering what kind of case you’ll get for it, and a new TV might look better on a different TV stand or wall mount. 3D printers are no different, and where they’re going to go and what they’re going to go on are important decisions to be made.

Getting a 3D printer is exciting, especially if it’s your first one. But before you plug it in and get going (but after you’ve built it if you’ve bought a 3D printer kit 😀), there are a few things to consider when it comes to 3D printer stands and tables.

Bigger 3D printers require more space to fit them, while different types of 3D printers or projects will require different things like filaments, paints, or tools that should be kept handy. 3D printers are often at least 10kg, with most desktop 3D printers sitting at between the 13-15kg mark. For more professional 3D printers, expect them to be even heavier!

When deciding on your desk for your 3D printer, you’ll need to keep a few things in mind. Most 3D printers will need to be in well-ventilated areas for maximum safety, sometimes a 3D printer enclosure can work if you take any potential fumes into account.

There’s also the matter of easy access to peripherals. If you’re using an FDM printer, you’ll probably want easy access to your filaments, so your 3D printer table should include holders or at least enough space for a filament storage box.

While a standard workbench or desk will normally do, you’re going to want a 3D printer table surface catered to you and your printer to maximize both safety and efficiency. So here we’re going to look at some of the best, coolest, and most practical tables and stands for your needs.

What Do I Need from a 3D Printer Stand?

Many people will tell you that a table’s a table, and yes, that is true. Provided you don’t go too cheap, an IKEA table for a 3D printer isn’t a completely out-there idea.

While standard benches or desks may work well enough as 3D printer tables, there are some things you’ll want to look out for to maximize both safety and efficiency.

3D printers do require some space around them free of both dust and loose debris. Wood surfaces are perfect as they’re easy to keep clean and won’t get too hot during those long-haul projects.

When working with materials like resin, it may be tempting to keep your 3D printer stand covered at least partially in towel or cloth, but this will increase the risk of fires should anything go wrong. Let’s face it, any workstation is going to get stained eventually.

Even if you have a 3D printer with an enclosure, the space around it still needs to be clean to ensure proper ventilation and cleaner air around your workspace. Dust gets kicked up easily as it is without a working machine in the mix.

You wouldn’t put a baby in a wobbly high chair, and you wouldn’t ride a roller coaster with a broken safety bar. So definitely don’t put your 3D printer on an unstable surface.

Any table or stand for a 3D printer needs to be stable and capable of handling the printer’s weight.

Not only will this protect your likely expensive equipment from hitting the floor from 3ft up, but a sturdy 3D printer table will also mean that things won’t go crashing down mid-print. A working machine carries plenty of risks as it is, the last thing you want is a stand that might collapse while printing, which is an extreme fire hazard.

As well as sturdiness, shock absorption is also important to lengthen the shelf-life (pun intended 😉) of your workspace. While there are vibration-free tables out there, simply tightening the screws and level-checking from time to time should be enough.

A simple shake test to check for wobble is usually fine, but also make sure your table can take the weight of your 3D printer. Some are heavier than others, and not all stands are created equal, so just make sure you’ve got a strong surface that doesn’t buckle under your printer’s weight and you should be good to go!

A clean and sturdy surface will make for a safe 3D printer table, but there’s nothing wrong with some extra additions to make your work more efficient.

If your 3D printer needs to be connected directly to your computer, installing hooks under the table to hold the wires will both clean up your work space and reduce the risk of tripping.

Filament and material storage is also good. If you have your 3D printer in a cool and dry place – like a garage – then it’s handy to have a 3D printer stand or desk with enough space to store your filaments makes for a more efficient workspace.

Provided you have enough space, desktop storage for resin, gloves, scrapers, and any other tools will make the whole printing to post-processing much smoother by keeping all necessary components in easy reach. Digging through a toolbox or disorganized drawers (which many of us are guilty of having) is never a fun job, and built-in slots or holders for your tools is a great way to cut out all the rifling.

For other tools that can come in handy, read our guide to 3D printer accessories

Where are the best tables for 3D printers?

If you don’t already have a usable surface, or if you just want to make sure you’re getting the best, you can buy plenty of workbenches, stands, and tables ideal for 3D printers that come with a variety of applications.

From vibration-free fixtures to specifically shaped drawers, finding the 3D printer stand that’s right for you is just a matter of knowing what you need.

It’s worth noting that I do not recommend wheeled 3D printer tables. There are a lot of people who recommend them, but I’m personally paranoid about weak brakes, so I avoid them for hot, electric things like 3D printers. They can also be less stable, and you don’t want anything making your 3D printing environment less sturdy that could have even a minuscule effect on your print’s surface finish.

Not just one of the strongest affordable benches out there, the Olympia hardwood workbench is also one of the best-looking.

If you like to show off your workstation, then this hardwood desk is definitely something to add to your cart. As well as being very nice to look at, the Olympia works very well as a 3D printer table.

Sturdy enough to hold several times what the average 3D printer weighs, and with enough desktop space to keep any peripheral tools or resins within a safe distance, the Olympia is an ideal 3D printer stand.

Hardwood is also famously easy to clean, so it’s easy to keep dust-free. And for under $200, it’s definitely worth adding to your wish list at least.

While the foldable nature of this heavy-duty 3D printer workbench isn’t useful for the not-so-portable machines that are 3D printers — it’s the sturdiness that really counts here.

With a pedal lock on the bottom of the legs, this workbench is a great 3D printer table as it’s more vibration-resistant and stable than many others.

In addition, it comes with a pegboard for handy access to scrapers and other tools without risking leaving them around and cluttering up your space or, worse, getting lost.

Sometimes simplicity is key. Bells and whistles can make for confusing spaces, and while drawers and pegboards do come in handy, sometimes you just want a strong surface to use as a 3D printer stand.

Despite being designed for computers, this home office desk is an easy-to-assemble steel frame that’s deep enough to comfortably fit most 3D printers and still leave enough space for extra tools, gloves, and other pieces.

The extra space can also be used for the desk’s original purpose; a computer to plug directly into your printer.

The lack of drawers does limit storage somewhat, but the wide space below is perfect for storing boxes of filament.

If built-in storage is a must for your 3D printer table, however, there’s also this computer desk with shelves on which you can keep resins and tools. Available in a variety of sizes, you can choose which version of this table suits your 3D printer and/or your available space.

If like me, you don’t have a lot of space to spare, IKEA Lack tables are sturdy and strong 3D printer tables for smaller models.

Not only are they stylish, they’re also fairly cheap and don’t take up much space. They can make your 3D printer something of a centerpiece, or be put into the corner so nothing gets in the way.

The empty underside means you can store things safely under them too, and the variety of available colors means you can even pick one out that goes well with your printer. The Fall and Rise of HDPE 3D Printing Filament