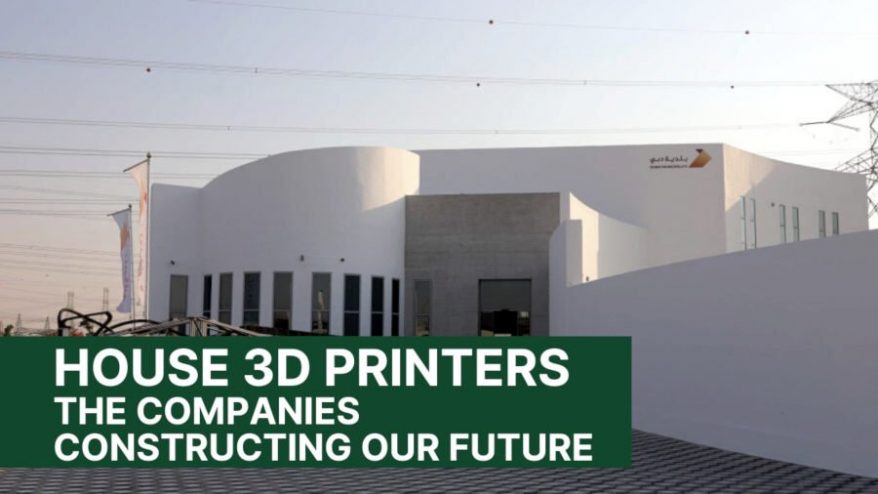 With the house and construction 3D printing sector predicted to become a $40bn market by 2027, a number of companies have raced to create the first house 3D printers that can reliably and quickly build hundreds of houses at low prices.

Though still in need of refining and optimizing, these house 3D printer companies have made huge progress in the last few years, going from building the first basic concrete walls to creating entire offices, government buildings and beautifully designed homes.

We therefore researched some of the most innovative and exciting house 3D printer companies, listing their achievements and showcasing their innovative construction 3D printers that can extrude tons of concrete to create houses in mere hours.

Russian company Apis Cor famously 3D printed an entire house in just a single day back in December 2016, going viral and commanding worldwide attention for this extraordinary feat. Since then, Apis have won NASA prizes for potential space 3D printing techniques for creating structures on Mars.

Then in 2019, Apis Cor made headlines again when they built the largest 3D printed house in the world, a huge building in Dubai to be used for administrative purposes. The building took 17 days to print and encompasses 640m2. Having built houses in Russia’s tough winter climate as well as hot Dubai, Apis Cor have proven they can create durable 3D printed houses anywhere.

Their house 3D printers are huge goliath structures, with a 4.5-meter-long polar 3D printer specifically built for concrete extrusion. It can be set up in 30 minutes, depositing concrete layer-by-layer to create a full house structure. These house 3D printers only create the structure however — the equivalent of a car chassis — that skilled workers can then finish by adding plumbing and electrical systems.

CyBe are another hugely innovative company in the 3D printed house sector. Responsible for the house showcased during Milan Design Week, as well as 3D printed bridges in the Netherlands and concrete buildings built in Saudi Arabia, CyBe Construction are making huge progress in building habitable houses using their concrete 3D printers.

The Dutch house 3D printer company have two construction 3D printer models, the CyBe RC 3Dp, and CyBe R 3Dp, able to print structures quickly at up to 200mm/s. They also use patented materials based on concrete mix, and claim they can fully construct houses for under $100,000.

These construction 3D printers are unique in that their tank-like tracks allow them to move around building sites and positioning themselves to deposit concrete. Like Apis Cor, CyBe house 3D printers are active in Dubai, having built buildings that are to be used for drone R&D, as well as in India and Japan.

WinSun is a Chinese company which made headlines back in 2014 by building ten 3D printed houses — small concrete buildings that cost $4,800 each — in just one day. Since then WinSun have continued to innovate, 3D printing an eco-friendly bus stop in 2017, and collaborating with Elon Musk to help build the first Hyperloop tunnels.

WinSun claim to have sold more than 100 3D printed homes, using their FDM-style construction 3D printers that extrude cement and sand materials to build walls. More recently, WinSun also worked in Dubai Future Foundation to 3D print the “office of the future”, a picturesque concrete office that would look at home in Blade Runner or similar sci-fi future world.

ICON are not just a 3D printing company, but also focuses on robotics and traditional construction projects. Based in the USA, ICON are backed by Paul Graham’s legendary tech incubator and investment wing Y Combinator, and have ambitious goals to build exciting buildings all over the world with their powerful Vulcan II house 3D printer.

ICON collaborated with New Story to build a simple yet smart home in Austin, Texas, costing $4,000 to build. Since then, ICON has moved on to creating homes in Mexico, and in 2020 secured $35M to commercialize 3D printed home building technologies, taking their total investment to $44M.

ICON have also pioneered research into their concrete-based material to prevent it creating imperfect layers or hardening too quickly. The actual material mix itself can be altered based on needs and uses, making ICON’s offering versatile and changeable based on the local environment.

Spanish house 3D printer company Be More 3D was founded by four young entrepreneurs studying a variety of architecture-related disciplines at the Polytechnic University of Valencia.

Since then, they’ve built a sleek 24m2 house in Valencia, as well as a 32m2 house they 3D printed in 12 hours for the Morroco-based Solar Decathlon Africa event in 2019 – winning the prize for most innovative start-up.

They sell their very own concrete construction 3D printer, the BEM Pro 2, which can operate even in hot and harsh climates, making it great for 3D printing houses near the equator.

WASP are an Italian 3D printer manufacturer who sell a variety of desktop delta 3D printers as well as clay 3D printers for the ceramic market. These include their Delta Pro range, claimed to be the fastest 3D printers in the world.

With far larger ambitions however, WASP also have two construction 3D printers, the BigDelta and Crane WASP house 3D printers. The BigDelta is claimed to be the world’s largest 3D printer, at 12 meters tall and 7 meters wide.

WASP’s vision is to solve the growing housing crisis by building cheaper homes in the developing world. Currently working with concrete, WASP aim to be able to extrude straw and earth so that their house 3D printers can construct liveable homes using naturally sourced and local materials.

Recently, WASP built the Gaia eco-sustainable house, proving the concept and showing a sleek yet basic small house can be 3D printed with ease.