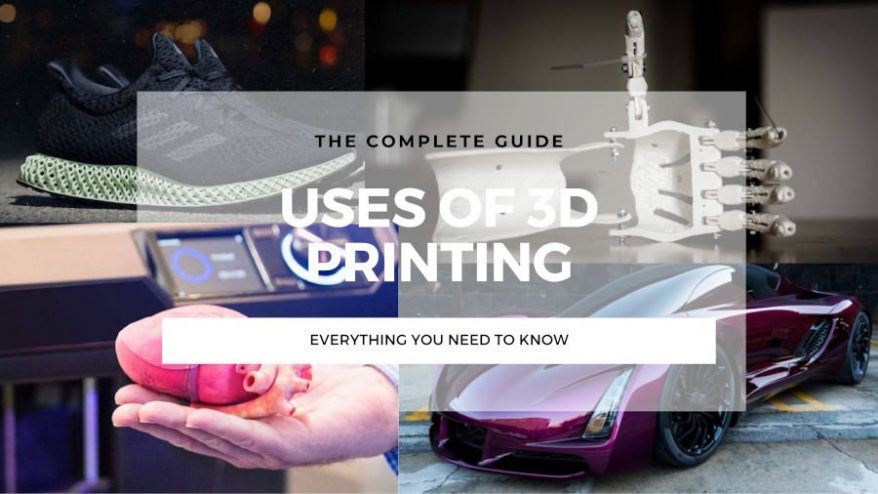 From the first uses of 3D printing in niche car parts back in the early 1990s, 3D printing has grown to impact almost every major industry worldwide in some capacity. Most people don’t realize just how wide-ranging 3D printing applications are in today’s society.

What is 3D printing used for?

There aren’t just three main uses of 3D printing, but dozens. To answer the question of what 3D printers are used for, we could include at least 50 examples.

Therefore, we’ve picked 15 major uses within 8 industries that show how versatile and important 3D printing is in the present day.

Hospitals are increasingly turning to 3D printing uses in medical, such as in orthopaedics, surgical implants, and custom surgical instruments.

Great advances have been made in 3D printing medical applications since Welshman Stephen Power first received a 3D printed skull bone implant. Metal 3D printers can make sterile and implantable joints, bone segments, and even entire bone structures customized to perfectly fit the patient. If printing in-house, this makes for faster implants that can be created in just hours.

Moreover, 3D printing also has applications in training surgeons. Complex organ models can be 3D printed that mimic real hearts, lungs and other organs, so medical students can practice on them and perfect their technique before ever operating in a situation with fatal consequences. These better trained medical staff traverse the steep learning curve faster than ever with more effective practice. Polyjet 3D printers are commonly used for their accuracy and full color 3D printing abilities.

Most dental mold techniques require biting into blocks that some find invasive and uncomfortable. Using a 3D scanner, accurate mouth models can be made without having to bite down on anything, which are then used to create your aligner, denture, or crown mold. Dental implants and models can also be printed in-house during your appointment, and at a far lower cost, so you don’t have to wait for weeks for it to be delivered.

3D printing’s custom, one-off methods make it perfect for prosthetics. Current prosthetics can cost thousands of dollars to produce, and, if you’re still growing, mean you have to keep replacing them as you get bigger. Around 1 in 1,900 newborns in the are born with a limb deficit, so it’s crucial we find efficient ways to produce limb prosthetics for them.

The many uses of 3D printing extend to arm prosthetics, with non-profit organization E-Nable bringing together thousands of volunteers who 3D print prosthetics for those without a hand, wrist or elbow. 3D designers have optimized and improved a number of prosthetic hands over the years, and thousands of free 3D printed prosthetics have since been donated.

Standard prosthetics can take weeks to make, whereas 3D printed prosthetics only require a 3D scan of the area, and the parts can be made in hours. They can be produced using standard 3D printer filaments on an FDM 3D printer for less than your average meal out at a restaurant.

3D printing applications in leg prosthetics are far less advanced however, with difficulties supporting the weight of our upper bodies. There is hope for stronger metal 3D printed prosthetic legs in the however, but these would still cost far more than plastic prosthetic hands.

Rather than 3D printing plastics or metals, 3D bioprinting prints real human cells, in scaffolds, to create living 3D printed organ tissues. Transplants from other human donors are often rejected by the body, so patients have to take anti-rejection drugs that dampen their immune systems. With 3D printed organs, the patient’s own cells are taken and used to print the tissue or organ, so there is no chance of the body rejecting it.

The technology is still in its infancy, but promising progress is being made. Miniature hearts and lung models have been printed, as well as transplanted skin tissues on mice that have connected with and joined the mouse’s blood vessels, proving that 3D printed systems can collaborate with natural human biology.

In the midst of a worldwide housing shortage, concrete 3D printers offer super fast, cheap, and automated housebuilding. Entire concrete house chassis can be built in just a day, key for creating basic shelters for those who have lost their houses during natural disasters like earthquakes.

As house 3D printers work based on digital CAD files, they don’t need skilled builders. This has advantages where there are few skilled builders to build houses, with non-profits such as New Story using 3D house printing to build thousands of houses and shelters across the developing world.

With the potential to speed up housebuilding to just a few weeks, bring costs way down, and use more environmentally friendly versions of cement, 3D printed houses could be the future of housebuilding. Whereas some of the uses of 3D printing we mention are mostly fun, this is one 3D printing application with the potential to transform the lives of millions worldwide.

Uses of 3D Printing in Cars and Car Parts, and Boats

One of the first uses of 3D printing was in the car industry, creating prototypes of new car parts. Now, not only is 3D printing used in car part prototyping, but several innovative projects have created entirely 3D printed cars!

These range from small, everyday cars with max speeds of just 30-40mph like Local Motors’ Strati, to 3D printed supercars like the Divergent Blade.

Additionally, 3D printing is used to bring back classic cars from the scrapyard. Featured in classic films of the 60s and 70s, everyone dreams of owning a stunning, nostalgic classic sports car, but unfortunately many of these cars have been around so long that there are no replacement parts available any more, with manufacturers no longer producing them. Without new parts, they’ll eventually cease to exist.

But 3D printing offers an alternative. Using a 3D scanner to scan the area, custom 3D printed car parts can be produced, creating new parts for these cars so they can show off on roads again.

There have been a number of other exciting boat projects with 3D printed parts, too.

Though still in its infancy, 3D printed clothes and even high fashion have proven increasingly popular. With flexible filaments like TPU, intricate, custom clothes can be created, such as garments made by Danit Peleg and Julia Daviy.

At the moment these garments take so long to produce that prices are still high, but with innovations in the future, 3D printed clothes offer customization and new designs never seen before. Clothing is a lesser-known application of 3D printing, but has the potential to impact perhaps the most people of any use — we all need to wear clothes, after all.

When Eliud Kipchoge broke the 2 hour marathon record, he did so wearing a custom pair of Nike 3D printed running shoes — the AlphaFly — now commercially known as the Nike ZoomX Vaporfly.

However, you can go even further. Low cost resin 3D printers such as those by Elegoo and Anycubic offer good enough quality resin designs to create resin molds that can be used to cast jewelry — even in precious metals like gold. Increasingly 3D printing is used for molds, using lost wax casting, to create gold and diamond jewelry sold online and on the high streets.

Rapid prototyping is the most common use of 3D printers in engineering, design and manufacturing. Before 3D printers, iterating was a lengthy process — testing designs took ages as making new prototypes could take days or weeks. Then with 3D CAD design and 3D printing, new prototypes could be printed in hours, tested for effectiveness, and then changed and improved based on the results, many times per day.

Perfect products could now be built at record speeds, speeding up innovation and bringing better parts to market. Rapid prototyping is heavily used across the car and automotive, engineering, aerospace, and architecture industries, and is the main application of 3D printing.

Hipster restaurant pop-ups have appeared across big cities, offering pretty plates of 3D printed food at luxury prices. Currently, home food 3D printers are limited to chocolate and other simple food ingredients, but innovative, more expensive food printers are beginning to be able to create pizzas, and even meat.

A number of startups have even made incredible progress into 3D printing meat, mimicking the taste and texture of meat in vegan compounds made from beans.

These guns have no serial number, do not trigger some metal detectors, and can fire live ammunition. This terrified governments, who acted swiftly to ban these gun files from the internet. However, back in 2013 when they first emerged, were unreliable and dangerous to the firer, and did not create the anarchy many feared at the time. Years later, they attract very polarizing opinion on their lethality and legality.

In emergencies — such as COVID-19

During COVID-19, the enormous demand for face masks and shields drove makers all over the world to rise to the occasion, 3D printing hundreds of face shields for individuals and hospitals. Designs for effective face shields were made available free online, and companies such as Prusa and HP redirected factories and workers to produce thousands of these masks and face shields.

Other designers created innovative parts to reduce infection chances, such as elbow-operated door handles to avoid touching surfaces with hands, showing how 3D printing can step in for the greater good when the going gets tough.