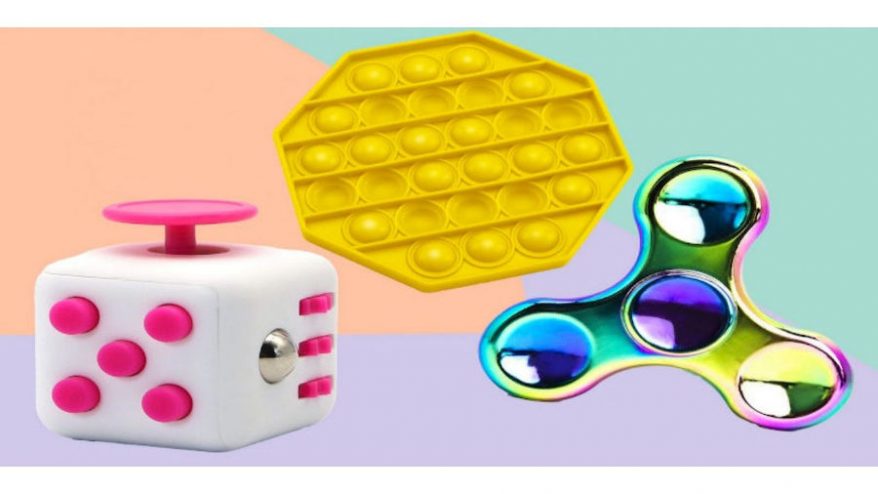 Fidget spinners and fidget toys took over the world at their popularity peak, and they’re still very commonly sought and seen today. It’s easy to see why, there’s just something really fun about idly doing something that requires little effort or even thought that’s somehow satisfying.

3D printed fidget toys add to this satisfaction by being toys and spinners you can make and customize yourself. Sometimes they’re recognizable fidget spinners, sometimes they’re unique spins (get it?) on little desk ornaments that you can play with when you’ve got a free hand or two.

While the classic fidget spinner is the most popular, there’s a surprising variety of fidget toys out there. From spinners to cubes, and even small anxiety helpers, there are a lot to choose from.

I know I’m sick of dropping pens I wasn’t even aware I was holding and wondering what that floorboard noise is before realizing it’s my own unconsciously bouncing leg. So we’re going to look at some cool 3D printable fidget toys to keep your hands occupied and your mind at ease.

Beginning with the classic, despite their initial patent being granted in 1997, fidget spinners became an overnight global sensation back in 2017. Suddenly everyone had or wanted one, and they became a staple of school playgrounds and office buildings alike.

By 3D printing your own fidget spinners, you can create your own rendition of these suddenly popular wonders, and here are a few of my favorites.

Pretty much any 3D printing project is in some way customizable, but it’s always cool when the design itself incorporates changeable shapes and parts to suit your mood or taste. While small, the changes you can make with the different caps in this design are pretty cool.

By printing the caps in different colors or adding different designs to each shape, you’ll effectively 3D print several fidget spinners in one!

Just like fidget spinners themselves, there’s something almost hypnotic about watching a whirring fan. Combining the two, this design is for a 3D printed fidget spinner that looks just like a jet engine fan!

The space between the fans is replicated with indents that curve inwards, giving the illusion of a working turbine. It’s a really clever design given its simplicity, and is satisfying to use too! If you like the design but want something a little closer to a standard fan, then why not check out this turbofan fidget spinner?

What is it about modern spins on old designs that give new life to traditional images? I don’t know, but I will tell you that I love it.

The layered design is simple but elegant, and it looks cool even as a desk ornament when not in use. Whether you recognize the Triquetra from a Celtic upbringing or just from Thor’s hammer, this is an undeniably cool fidget spinner to 3D print.

In 2016, around a year before the boon of fidget spinner popularity, the world was introduced to a similarly explosive fad, Pokémon Go.

Given the coincidence of these two pop culture storms, it’s not surprising that some people blended them together. This teacher realizes their students were obsessed with both, and so designed this 3D printed Pokéball fidget spinner for their class!

The iconic red and white design blends together while spinning to make a satisfyingly hypnotic view. All-in-all, it’s a great 3D printed fidget toy for any Pokémon fan!

Another popular variation on the 3D printed fidget toy is the fidget cube. They’re significantly younger than their spinning counterparts, only becoming commonplace in 2012, but their simple designs lend themselves well to 3D printing.

Fidget cubes also rarely rely on the inner mechanisms common to fidget spinners, so are arguably easier to print and assemble.

Like their spinning siblings, fidget cubes come in a few varieties, and so you’ll want to pick your favorite.

Based on the fidget cube’s debut style, this original cube is an easy fidget toy to 3D print and tinker with.

It’s easy to see why this 3D printed fidget cube is one of the most popular toy designs out there. It’s simple, it’s fun to put together, and it’s satisfying to use.

The different sides all have what you’d expect from a fidget cube, a smooth indent on which to rub your thumb, a notch-guide like a one-path maze, and a little wheel to turn.

If you, like me, often find yourself rolling a pen between your fingers or thumbing the notches in your computer mouse, then you’ll find this simple 3D printed fidget cube to be a relaxing addition to your desk.

Fidget spinners and fidget cubes are not mutually exclusive concepts, as this design for a fidget spinner cube shows.

As the name suggests, this is a 3D printed fidget cube designed to spin like a fidget spinner at the press of a button. If you’ve ever flicked some dice on a table just to watch them spin on their edges will tell you that it looks pretty cool as it forms an unmistakable diamond shape.

If you feel like getting creative, then why not tweak this design to include lights, brighter colors, or even images that can blend as it spins?

Kobayashi fidget cubes are a set of interlocking parts attached by hinges that can be rotated and moved to make different shapes. They’re popular as fidget toys and make for very satisfying 3D printer projects. Think of them as plastic origami sets, that’s what I do.

A good example of these 3D printed fidget toys is this fidget star design that form different shapes depending on where you bend the hinges. They’re a fun play with without needing to pay too much attention.

For something more traditional, there’s also this Kobayashi cube design that goes from a snake to a cube and everything in between with the right movements, making an excellent fidget toy that won’t drive you crazy.

3D printed fidget toys don’t all need to be used idly, some are designed to be looked at and figured out while you fidget. The most famous example of this is the Rubik’s Cube, but not all puzzle cubes need to be so mentally taxing (or is that just me?)

It’s strange to think of puzzles as fidget toys, but the distinction is narrow enough to believe. Some 3D printed fidget cubes involve color coordination like this one.

There’s also this easy-print puzzle cube that operates like a 3D jigsaw. It’s simple but finicky enough to offer the kind of mild distraction you might be looking for. It can even be a good toy for young children if you print it big enough.

Similar to it is this ‘Identical Twins’ puzzle cube that makes a great 3D printed fidget toy that’s easy to make and a little trickier to put together to make a satisfyingly neat shape.

If you want something a touch more complex, I really like this double cube design that shifts and shapes similar to an old-school ‘cootie catcher’ that many of us played with as kids.

Most 3D printed fidget toys will rotate or pivot in some shape or form, but there are few sights more inherently gratifying than seeing cogs and gears work together in perfect sync.

If you’re careful with the measurements and make sure they fit just right, you can make some awesome 3D printed fidget toys with moving gears.

Starting with one of the coolest designs, this epicyclic fidget toy goes a little beyond the standard ‘move a lever and watch it go’ format.

The dome-like handle makes it easy to hold while you fidget away. An excellent toy for procrastinators, and fun to mess with, I recommend getting these little pieces printed and moving before you chew the end off another pencil.

While more of an educational trinket, this easy-to-make gear toy is no less a 3D printed fidget toy to get started.

Ideal for beginners or people who want to introduce their children to the fundamentals of mechanics, it’s a great little pocket toy to 3D print and fiddle with when you find yourself idle.

Similar to this but a touch cooler is this multi-directional gear toy that’s just as easy to print. Personally, I find it stands out because it looks like Batmobile wheels if printed in black, but that might just be me.

Beveled gears have always looked cool to me, so I had to mention this beveled gear toy set as a 3D printed fidget toy option that’s a little bigger than most but no less worthy of a place at your workstation.

It’s only large in its standard size, but provided you keep the ratio equal; you can scale it to be any size you want. It’s a simple concept of moving a gear around a printed circle that’s notched to match the gear’s teeth.

Like most 3D printed fidget toys, elliptical gears are really cool to look at. With their often-oval shape and lack of central pivots, they move and turn in hypnotic ways like how you’d imagine one of DaVinci’s flying machines would look.

There are plenty of cool examples of elliptical gears as fidget toys you can 3D print. This easy shape is a good early project if you’re new to 3D printing, or you can opt for the standard egg shape like the one found here to satisfy your procrastination needs.

If you want to get fancy, then you should check out this four-way elliptical gear set that’s just like a fidget spinner you move yourself. With enough color variation and some intricate fingerwork, it makes for an awesome 3D printed fidget toy.

3D printed gear fidget toys don’t need to always look like they were taken from a gutted machine. Some designers have gone out of their way to make fidget toys that resemble recognizable shapes and icons.

These heart gear fidget toys are excellent examples of this. Heart ornaments are common just about anywhere, so why not make one you can fidget with? I don’t recommend giving them as Valentine’s gifts, however, as their fractured look might give the wrong impression!

If you love this design, then there’s also this micro gear heart that works well as a keyring so you can fidget on the go. Or go the other way and get yourself printing and assembling this massive version to show just how much you love to fidget!

I also love these updated gear cube designs which combine the fun of gear mechanisms with the intricacies of a puzzle cube.

As a Whovian, I can’t talk about cool fidget gear designs without mentioning my personal favorite, this geared Tardis fidget toy that resembles the good Doctor’s iconic time machine!