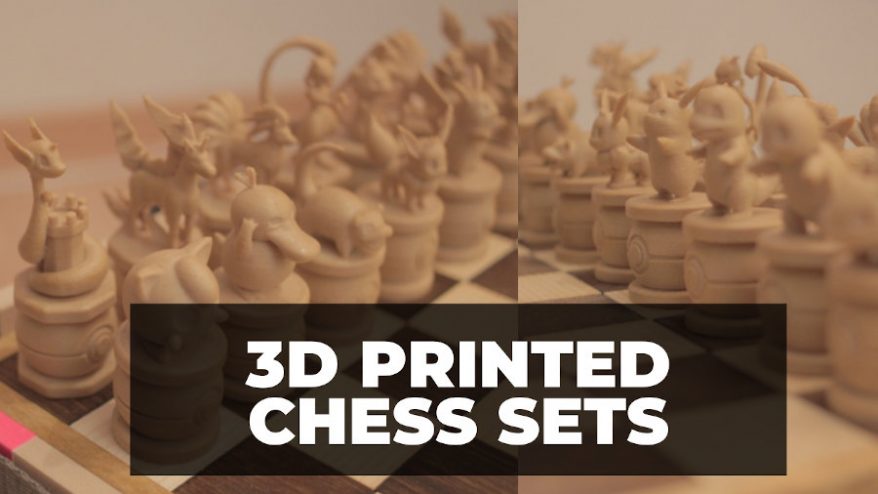 Chess is one of the oldest known games in the world, dating back to 6th century India as a war simulation to develop strategizing and logical thinking. Despite its age, its popularity has only grown, and chess is now one of the most popular games on the planet.

Many chess players are very serious about the game and, like many enthusiasts, prefer to have their own special or custom boards and pieces with which to play.

Chess boards may seem uniform, but the creativity required to make something unique can be difficult. Maybe you want to have a chess set made of your favorite Pokémon? Maybe you have specific shapes in mind for the pieces to match your décor? Designing these from scratch isn’t easy, but luckily the internet is full of inspiration.

3D printable chess boards and pieces are a very good way of making your own set to your specifications, or as a way of adding to a collection of memorabilia for your favorite fandom.

Because chess sets are often of a standard size, 3D printing your own boards and pieces can be done fairly easily from scratch. But for inspiration or specific chess sets, there’s no shortage of intricate, creative, and sometimes downright inspired 3D printed chess sets to be found.

Let’s take a look at some of the best chess sets for various kinds of players, from educational to elegant, each one sure to incite some mid-game conversation.

The main thing to keep in mind when 3D printing your own chess sets is that you will need at least two colors to make usable boards and pieces. This is easily achievable if you have a 3D printer equipped with a dual extruder, but the pieces can also be printed one color at a time.

As long as you have that down, you should be good to go!

Because of its immense popularity, there are plenty of Pokémon-themed 3D printed chess sets to choose from all across the internet. But this one caught our eye due to the impressive design and clear attention to detail.

Instead of the pieces being made distinct in shapes, these 3D printed chess pieces are instead marked by the shapes of their bases. Pawns are round, the kings and queens are pentagons, etc. The designer assures us in the notes that keeping track of which piece is which while in play is far easier than it seems.

Nidoking and Nidoqueen being a king and queen piece respectively is a touch I personally adore, while the same roles being filled by Mewtwo and Mew on the opposite side is also quite clever.

Designed as a birthday present for a friend, it’s clear to see that a lot of love went into each piece. While the limited number of chess pieces per board means you may not find your favorite here (I got lucky with the inclusion of Vulpix 😀) any lover of the Pokémon franchise will find a particular joy in printing and owning this set.

Of course, if you are disappointed to find that your own favorite isn’t available in these files, you can always make your own and add it yourself, as the bases are the main important part of these 3D printed pieces.

Many of you reading this probably remember being taught how to play chess by a parent, and maybe you want to teach your own kids someday. Teaching chess makes for some memorable bonding time, after all, and is something of a tradition all over the world.

With that in mind, we’re beginning this list with the 3D printed chess set designed for beginners, this creative design was made with young children and total newbies in mind.

While not the most aesthetically pleasing 3D printed chess set out there, the pieces are decorated with their corresponding names and a visual representation of how they move.

This is a fantastic way to teach and learn chess, as the simple labeling will get any learner used to the pieces’ names and their legal movements. By memorizing these movements as a learner, you’ll grasp the fundamentals of chess much faster than if you were taught using a traditional board.

After a few games with these 3D printed chess pieces, even the most inexperienced newcomer will be able to take on a traditional set with a good idea of how the game is played.

The files available here come in a few different sizes, the larger of which is ideal for households with particularly young children to make sure they don’t choke on them.

This 3D printed chessboard and pieces require a double-take to confirm that it’s not your average set. The jigsaw pattern of the board is cool enough to stand out while being subtle enough to not be immediately noticeable at a first glance.

The instructions included with the files here seem to suggest white and blue as standard, but this set would look just as cool within a red and black, green and brown, or any color combination to match your tastes or décor.

A concise guide on how to make this printable chess board is included, along with a few dos and don’ts to make sure you don’t confuse this 3D printed chess set with the plywood-cut original that it was based on.

For a more minimalist but no less impressive jigsaw piece chess set, you can check out the alternate design here. While more of a standard design aesthetically, these pieces easily separate and are pretty fun to put together like a standard jigsaw puzzle as a mini activity before playing.

Many chess sets these days fold in half for easy portability, but they still take up quite a bit of space in a backpack or suitcase. This creator took a leather design and turned it into a 3D printed chess set that rolls up neatly into a cylinder for easy transportation and storage.

Powerful magnets are used to both hold the pieces in place and ensure that the board stays rolled up when not in use. In the files here, there are also details on how to make a slightly downgraded version if you’re only able to print in one material.

It’s difficult to think of a less subtle telling of the struggle between light and darkness than the Star Wars franchise. Naturally, the black and white colors of standard board lend themselves well to a 3D printed Star Wars chess set that any fan will want in their homes.

Unlike other examples, each side of this 3D printed chess set has distinct pieces, with black and white resembling the Sith and the Jedi sides respectively.

The Star Wars chess set wasn’t created by a professional, but by a teacher as a project for their 8th-grade students. Because of this, the set is open for improvement, customization, and a little bit of tweaking to get just right.

Of course, the only real downside is that those who are used to traditional chess sets may find the different pieces are a touch confusing, but with enough games, it will become second nature.

The R2D2 and Stormtrooper pawns are a particularly nice touch, as is the mix of heroes, villains, and various ships that are easily recognizable to fans of the series.

Prominent and very creative designer 3DPrintBunny has many 3D printed chess sets in her impressive portfolio, including pieces resembling famous figures from notable films and shows like South Park, The Avengers, and Game of Thrones.

Each of her sets comes as individual pieces and includes a storage and display box.

My personal favorite of hers, however, is her 3D printed chess pieces made to look like famous buildings from around the world.

All of the pieces can be put together without needing glue, and the attractive display case will let you display this set with pride when not in play.

There’s a box lid within the files for easy transportation, and it comes blank as standard. 3DPrintBunny offers custom designs with personalized text if you want something unique or are planning on giving one of her sets as a gift.

Chess sets feature in many homes as decorative pieces as well as games. Some decorative sets are small, while others act as grand centerpieces. This 3D printed chess set is definitely the latter.

The large-scale chess set maxes out at a 60mm base, which is far larger than your average chess set. Along with the pieces is a printable chessboard that’s also designed to house checkers.

Because of its size, this chess set will need some gluing to stay together post-print. How to stick the pieces together is shown in the video attachment included in the instructions.

If you’re a fan of the design but not the size, the board and pieces can easily be scaled down. The board can still act as a place to store checkers if you design your own to a size that suits whichever scale you choose.

The example image shows a multicolored set to add a pop of color to any room, though it will look just as good as a standard two-tone set.

A simple design in concept, but beautiful in execution, the 3D printed planter chess set is made of printable pots in which you can plant succulents, cacti, and other houseplants.

These pots fit onto the chessboard like any other pieces, and can either be used to play a truly unique game or as a beautiful and one-of-a-kind household ornament.

Included in the files here is an ultra-thin 3D printable chessboard that’s designed to go practically anywhere, meaning you can turn any space – indoors or out – into a board on which to play. This board is only 0.6mm thick, so be careful with it as it will be very fragile once completed.