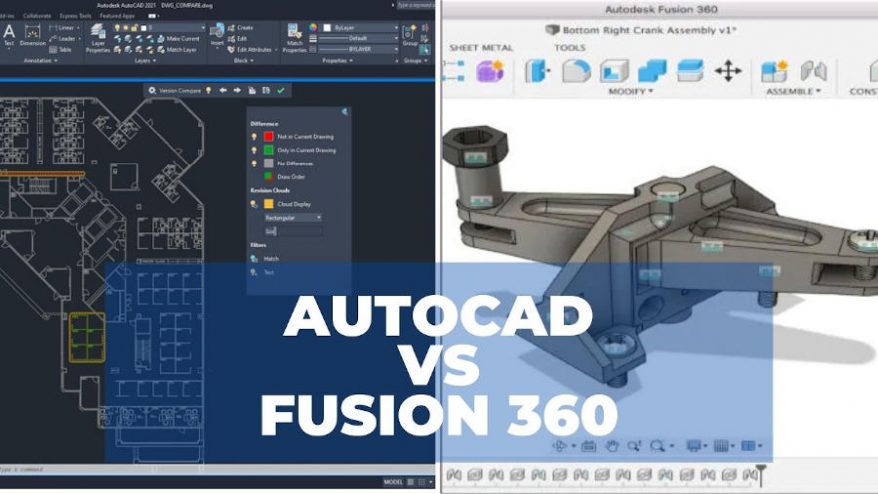 Whether you got yourself a top-of-the-line 3D printer or a more affordable model, or you’re just looking into 3D modeling, you’re going to need some good CAD software if you plan on making those unique and cool models.

CAD modeling and editing software comes in many forms, and you’ll see a lot of popular and perhaps even familiar names popping up as you research which is the best one for you.

The AutoCAD vs Fusion 360 debate is a long-standing one amongst the 3D designers, but if you’re new to such software then you may find yourself overwhelmed by the terminology and vigor with which this debate can be held.

Both AutoCAD and Fusion 360 are owned and run by Autodesk, but there are reasons they are kept as separate programs, specifically due to their differing focuses and capabilities. We’ll take a magnifying glass to these here and show the key differences between the two.

Here we’re going to look at the key differences between what AutoCAD and Fusion 360 offer, why you may want to choose one over the other, and how they are best used depending on how you want to use them.

If you’re a beginner, you’ll want CAD modeling software that won’t throw you into the deep end when it comes to ease of use.

For those of you used to drawing and designing from scratch, you may find Fusion 360’s freeform style of model creation to be closer to what you’re looking for when creating models into which you can manually put a lot of detail.

However, if you prefer a more structured yet basic approach, AutoCAD favors geometric shapes to design 3D models. While more rudimentary than Fusion 360, AutoCAD does offer a simpler design platform that beginners should be able to grasp fairly easily.

If you have loftier, more complicated goals in mind when it comes to using your CAD software, like helping with interior design or architecture, Fusion 360 is capable of aiding with such details. Physics simulations will let you know how structurally sound a design is, and the free nature of its designing portions means you can ensure every last detail is as accurate as it needs to be.

AutoCAD, on the other hand, is suitable for simpler modeling or 3D printing projects, like preparing simple statuettes or editing details on pre-made CAD files.

AutoCAD vs Fusion 360: Which is best for beginners?

The usability of any CAD software really depends on your experience, but when discussing AutoCAD vs Fusion 360, it also comes down to whom each one is targeted.

Despite its more complex capabilities, Fusion 360 was generally designed to be fairly simple to grasp. The user interface is laid out simply and concisely, and the learning curve isn’t too steep even for total newbies.

However, AutoCAD’s customizable interface and variety of tools will mean that beginners will be able to get more comfortable with the software quite easily. If you’re a veteran 3D CAD designer, you’ll be surprised and the depth and detail you can achieve even with AutoCAD’s geometrically-focused design.

Neither are particularly difficult programs to wrap your head around, but that’s not to say just anyone can pick them up no problem. You’ll only really be able to use Fusion 360 to its full potential if you already have something of a background in creative design, while such credentials aren’t necessary to find good footing with AutoCAD.

That being said, Fusion 360 isn’t designed for 2D CAD modeling. While AutoCAD is certainly capable of it, it’s far from the best around, so you’ll want to look elsewhere entirely if you also want to create and edit 2D models.

Neither requires any additional software to work and both are very straightforward to set up.

However, it should be noted that your decision on which to get will depend on how powerful your computer is.

Fusion 360 only requires 2.5GB of disk space and 3-4BG RAM minimum to function, AutoCAD needs 6GB of space and a whopping 8BG RAM as a minimum, with 16GB being recommended.

This is largely due to Fusion 360’s constantly online, cloud-based structure. So while Fusion 360 may be capable of more complex designs, AutoCAD is far more demanding, especially on older or less powerful machines.

This is where the AutoCAD vs Fusion 360 debate gets a little sneaky. While it may seem like a no-brainer to go for Fusion 360’s annual price of $495 over AutoCAD’s $1,690, it’s definitely worth taking a closer look.

AutoCAD’s annual subscription is all-inclusive, giving you unlimited access to the software and all its features under one price. Fusion 360, however, comes with a host of extra features that charge additional fees.

The most prominent of these features is the ‘Cloud Credits’ system, which charges you to use its built-in cloud-based system. Effectively, this means that on top of the subscription price, Fusion 360’s ‘pay-as-you-go’ format means it becomes more expensive the more you use it.

If, however, you’re only planning on using these services casually and with less frequency than a professional or out-right enthusiast, you may find AutoCAD’s yearly cost to be a little too steep.

Because AutoCAD uses local files and doesn’t need an active internet connection to work, it’s arguably the most reliable of the two.

A sudden outage or slow connection won’t impede your work with AutoCAD, while such issues will create performance issues in Fusion 360, which needs a fast connection to work properly due to its cloud-based functionality.

While some effort has been made to ensure backups and updates are automatically created and installed to maximize Fusion 360’s reliability, it will still lag and become slower if you happen to be in the middle of a complicated project during these hours.

While updates tend to happen at night in an attempt to reduce performance issues in peak hours, this isn’t great news if you’re a night owl or otherwise busy hobbyist who can only really work in the late hours.

If you prioritize reliability in the face of complexity and internet connections, AutoCAD wins out.

Because both AutoCAD and Fusion 360 are run by Autodesk, the technical and customer support is similar for both in terms of efficiency and usefulness.

AutoCAD has a slight advantage as it is generally more popular than Fusion 360, meaning there are more resources, both official and not, out there, but that is not to say that getting help with any problems you run into while using Fusion 360 is any more difficult.

Overall, both AutoCAD and Fusion 360 have active support networks to ensure that any unlikely problems you’re not able to resolve yourself can be quickly seen to and corrected.

If you’re a Mac user, then the AutoCAD vs Fusion 360 debate may look a little different to you as both of them are heavily focused on Windows users.

While Mac versions of both AutoCAD and Fusion 360 exist, they are inferior in both usability and reliability because they weren’t designed to work with Apple software. The Mac versions of them both would more accurately be described as ‘ports’ than distinct versions.

Effectively, this means that you won’t get the same functionality when using either AutoCAD or Fusion 360 on anything but a Windows operating system. If you don’t use one, then you will want to look elsewhere for your CAD software.

AutoCAD vs Fusion 360 For 3D Printing

One of the most common uses of 3D CAD software is for use with 3D printers. Fortunately, both Fusion 360 and AutoCAD export their models as files that are compatible with most home 3D printers.

AutoCAD mainly exports STL files, whereas Fusion 360 exports as either STL or OBJ, but either one should work with pretty much any 3D printer out there. This means there’s no clear choice in AutoCAD vs Fusion 360 when it comes to compatibility for 3D printing, so either one is a good bet.

Because AutoCAD and Fusion 360 are comparable in many ways, neither is objectively better overall. As you may have already realized, which suits you better depends on what you plan on using the software for, and how often.

When to Choose AutoCAD

AutoCAD is more cost-effective if used with great frequency, and is far simpler to use if you’re after the basic functions almost any CAD design software provides.

Ultimately, AutoCAD is a 2D CAD software with incorporated 3D design functionality. While not capable of the physics simulations and material testing as Fusion 360, it is perfectly usable for 3D modeling for design and 3D printing.

When to Choose Fusion 360

While it does require a constant internet connection, the cloud-based storage and functionality of Fusion 360 mean that files are automatically backed up and it takes far less processing power to work well.

Fusion 360 is prominently for those of you with projects in mind that require a lot more detail than a standard 3D model. This includes things like interior design, architecture, and testing the aesthetic of various materials before bringing them to life.