Binder Jetting is a lesser known but versatile 3D printing technology which has applications in a variety of industries. Binder Jetting is similar to Selective Laser Sintering in that it requires powder on a build platform to 3D print. It’s used in two main areas: metal 3D printing and in the printing of sand models and casts.

If you’ve ever seen the term ColorJet 3D printing before, that’s also Binder Jetting. 3D Systems sell printers under the brand name Color Jet, so if you see this it is still Binder Jetting.

Read our guides to other 3D printing technologies here.

Before you start printing with Binder Jetting

To 3D print, you require a digitized model of the part you wish to create. These can be downloaded online from sites such as Thingiverse, or you can design them yourself. Compatible 3D printer file types with most 3D printers include .stl, .obj, and .gcode files. These can then be sent to the 3D printer for slicing and printing.

Binder Jetting involves depositing a binding agent onto a powder bed, layer-by-layer, to form a part. These layers are formed, one after another, until the full part is created. It could be described as a hybrid with elements of Selective Laser Sintering and Material Jetting, using a powdered material as with SLS, and a binding agent to create the part.

A printhead passes over the powder surface, depositing binder droplets (that are around 50 microns in diameter) which bind the powder particles together to form each layer of the eventual 3D model.

Once a layer is finished, the powder bed is lowered a layer, and a new layer of powder is spread over the previously printed layer for the print-head to pass over.

The accuracy and finish of the binder jetted object depends on a variety of factors. Firstly, the layer heights are important in determining the smoothness of the finish. In addition, the droplet size and powder size are important for accuracy and how well the complex geometry will be captured.

If you’re interested in purchasing a 3D printer, we may be able to help:

Once printed, the part is left to cure and gain strength. After this, the part is removed from the powder bed. Any powder that hasn’t been bound is removed via compressed air.

With Binder Jetting, supports are not required, in contrast to FDM or SLA. This is because parts are surrounded by powder. This also helps to reduce post-processing time, and also saves money as less materials are consumed.

Like SLS, Binder Jetting uses a powder bin. However, parts are printed without heat so there is no differential cooling and therefore no warping. This means that multiple parts can be printed easily during the printing process. This makes Binder Jetting a good candidate for low to medium volume metal part manufacturing.

If 3D printing full-color sandstone accuracies, are usually limited to 100 microns, whereas cores/molds are limited to between 240-380 microns. However, some printers are able to print as low as 50 microns if an especially smooth surface is required, though this makes printing more expensive and slower. Due to the lack of heating, parts have very good dimensional accuracy. However, there are potential shrinkage issues during the infiltration or sintering processes. These are hard to predict and can cause parts to shrink by 0.8-2% of the part’s total size.

There are two main types of materials used with Binder Jetting, sandstone and metals. Their applications vary greatly which we will explain in the next part.

Binder Jetting is a low-cost alternative to traditional manufacturing processes to 3D parts made from sand. A key benefit of using Binder Jetting is the full color 3D printer advantage, a rarity in 3D printing. This is done through mixing plaster-based powders with the liquid binding agent.

The printhead jets the binding agent whilst another (secondary) printhead jets in color. The part is then cured and cleaned to retrieve the finished part. This part is then usually sintered to make it stronger. Since the part is already correctly colored and any excess powder can easily be removed, another advantage of binder jetting with sand is very little post processing is necessary.

The same printing method applies as with full color sand printing. These molds are created and then cast, before being broken apart so the metal part inside can be removed. This allows for complex geometric shapes, in addition to being low-cost.

Binder Jetting can also be used to produce metal parts. The process involves metal powder being bound using the polymer binding agent. Like with sand, Binder Jetting allows for the creation of geometrically complex parts that traditional manufacturing methods simply cannot do.

Metals compatible with Binder Jetting include stainless steel, inconel, copper, titanium and tungsten carbide. In the near future binder jetting may be easily compatible with thermoplastics, too.

To create functional, strong metal parts, a secondary process is recommended. Depending on the intended functionality of the part, either infiltration or sintering is performed. These two processes are described below:

Once the part has cured, it is removed and placed inside a hot furnace. The binding agent is heated until is burns off, reducing the part to approximately 60% density and leaving voids in the part.

Bronze is then used to fill in these non-dense parts until the part is has over 90% density and is far stronger — it infiltrates the gaps. Parts created through this technique however are still less strong than parts created through powder bed fusion such as Electron Beam Melting or Direct Metal Laser Sintering.

Sintering can be done instead of infiltration in some situations. Once the part is cured, it is sintered in the furnace until it reaches a high density of at least 97%.

A reason some may prefer infiltration however is due to the shrinking that occurs during the process. It is almost impossible to predict which dimensions will be most affected, and the shrinking is not equal all over the part. This needs to be accounted for when designing the part on a 3D software tool but can still be problematic.

Intricate sand cores and molds can be printed using Binder Jetting 3D printers. The mold process is not too dissimilar to Lost Wax Casting, and allows for intricate geometries due to the support the mold provides.

Being one of the few technologies able to print in full color, Binder Jetting is a great option for colored prototypes. The ability to use color as well as print large sizes means that Binder Jetting is perfect for architectural prototypes like house extensions, swimming pools, hotels; as well as a host of other industries.

Advantages and Disadvantages of Binder Jetting Why Titanium 3D Printing is Going from Strength to Strength How 3D Printed Glasses Will Change Our Sight Forever 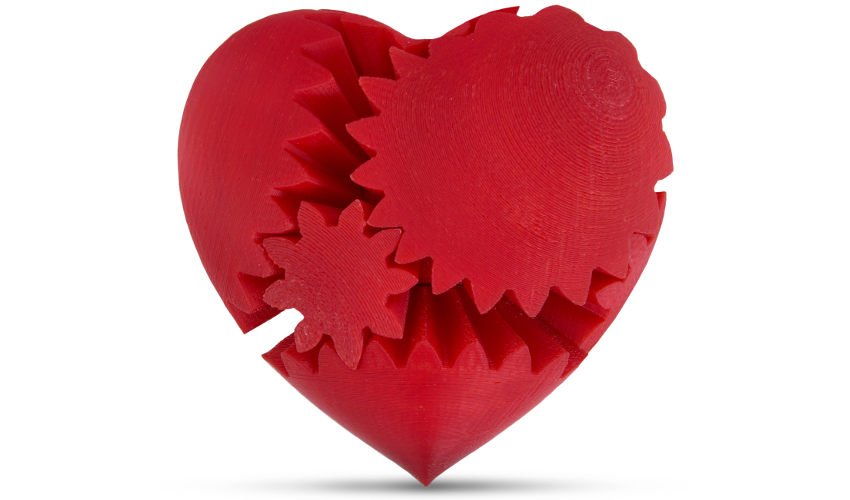 How Close Are We To Working 3D Printed Hearts?