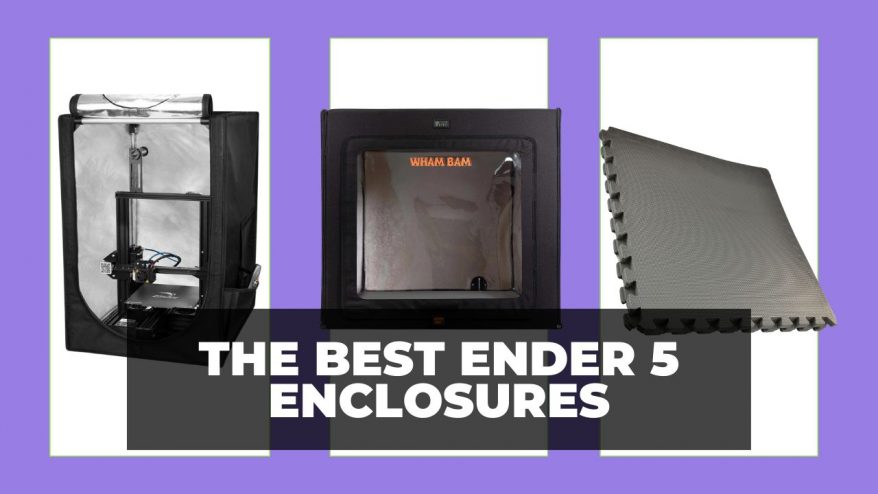 The Ender 5 is a solid out-of-the-box printer, evidenced by its unshakable spot at the top of countless best-of-affordable 3D printer lists. It isn’t perfect, though, and much like its smaller Ender 3 sibling, it’s screaming out for upgrades, not least an Ender 5 enclosure.

The basic idea here is to transform the Ender 5 into a printer capable of producing quality prints with more temperature-sensitive filaments like ABS.

An enclosure does just that by providing a steady ambient temperature around the printer and protecting your valuable prints from cooling too quickly – precisely what trickier filament needs to thrive.

We’ve broken down this guide into two sections:

Whatever your preference, we’ve pulled together our recommendations for the best Ender 5 enclosures, from manufactured options coming from none other than Creality to the creative use of everyday household items like exercise and kids’ mats.

Aware that one of the major negatives of the Ender 5 is the lack of enclosure, Creality offers its own purpose-built option – the Official Creality Enclosure.

It’s a convenient and affordable option if building your own sounds like a frustrating DIY nightmare, but it’s also one of the more versatile options out there. This comes mainly from the fact that the Official Creality Enclosure is designed as a tent that sits over the Ender 5.

The rigid iron frame that takes minutes to assemble can just as easily be broken down for easy storage when you’re not working with ABS, PC, Nylon, and the like.

Convenience aside, the Official Creality Enclosure does a fantastic job of maintaining stable temperatures around the printer.

The tent is lined with a heat-retaining aluminum film, while the outer layer features a flame retardant fabric to prevent fires. To reassure you, this is highly unlikely but knowing you’re safe provides peace of mind.

As added benefits, this Ender 5 enclosure traps in some of the noise for quieter printing, useful if you’re working in a small workshop or use your printer at home in a small apartment and aren’t ever too far from the printer, for example.

It also has a well-positioned front-facing zip door, a tool holder pocket, and velcro openings on the top and side for easy access to the Ender 5 without having to lift the enclosure completely.

Note that the Official Creality Enclosure is available in two sizes.

Are you looking for a more robust pre-made Ender 5 enclosure but don’t mind some DIY assembly and even 3D printing some parts to save costs?

If you’ve never heard of 3D UpFitters, they are a US-based company that produces 3D printer accessories, with a particular focus on premium enclosures.

Their enclosures feature all-around acrylic panels held together by ABS brackets for a 360° view of the Ender 5 at all times. By capturing the heat emitted by the bed, 3D UpFitters enclosures can maintain a stable 36°C to 38°C, ideal for ABS.

The real marvel is, however, in the details.

The enclosures feature an air scoop to direct cool air towards the PSU and electronic parts without the need for some heavy surgery to relocate them outside of the enclosure.

Furthermore, the enclosure is designed with a mount for the Ender 5 display to sit outside the enclosures for easy control of your printer. It’s sophisticated stuff that doesn’t crutch on a one-size-fits-all approach but rather is tuned specifically for the Ender 5.

The custom feel also extends to the array of add-ons 3D UpFitters offer.

Though one of the more expensive Ender 5 enclosures out there, you’re buying quality and a guarantee that the Ender 5 will pump out superb prints with even the most demanding temperature-sensitive materials.

If you want to dampen the cost, you can print your own brackets as the company provides all the STL files needed. If convenience is a top concern, 3D UpFitters can print these for you using top-quality ABS for a price.

Note that 3D UpFitters has two Ender 5 enclosure options: one suited to the Ender 5 and Pro, the other to the heftier Ender 5 Plus. Be sure to buy the correct size for your printer.

The Wham Bam HotBox Mega Enclosure hits that sweet spot between the convenience of the Official Creality Enclosure and the premium design of the 3D UpFitters enclosure.

It’s a better-made tent enclosure that’s even easier to assemble with enough room to act as an Ender 5 Plus enclosure alongside the smaller Ender 5 and Pro.

Unlike the Creality enclosure, the Wham Bam HotBox Mega Enclosure ships all-in-one with a lightweight, semi-rigid construction you can set up in under two minutes without any tools, thanks to two zippers that connect all four panels.

These also allow you to open up the front and top panels for printer access. The tent-style design also means easy storage with the enclosure folding down flat.

The panels feature an insulating sandwich, as Wham Bam calls it, consisting of a polymer honeycomb board, Nylon, and a metallic internal liner. All these work to deliver toasty temperatures while acting as a barrier to keep out unwanted drafts.

You can easily check your prints’ progress for any mishaps or errors through the large front-facing window.

The window panel is velcroed for easy access to the Ender 5 should you need to pause a print or tweak a setting on the display. The enclosure also features multiple metal-line cable passages along with two large spool holder access holes with resealable plugs to prevent hot air from escaping when not in use.

Finally, rounding up the Wham Bam HotBox Mega Enclosure’s spec sheet is an in-built thermometer with a front-mounted display, loops for optional LED light bars, and passages to add in air filtration if you fancy the extra step.

In many ways, the Wham Bam HotBox Mega Enclosure takes the basic concept of Creality’s enclosure and improves it in more ways than one, perfect for those that want a more reliable Ender 5 enclosure.

However, it does cost almost twice as much, but the money is certainly well spent.

Before manufactured solutions from the likes of Creality and 3D UpFitters were available, makers had to rely on novel solutions to transform their machines into ABS-ready printers.

One of the most popular and long-running options is to transform furniture into an Ender 5 enclosure.

It consists of taking a small table, often Ikea’s ever-popular Lack, as a frame, turning it upside down, and attaching panels made of wood or plexiglass on the top and sides to create an enclosed chamber for the Ender 5.

As you’ve probably guessed, it’s very much a hands-on project that involves custom measurements, troubleshooting, and some planning, but as DIY projects go, it’s one of the easiest.

Sadly, Ikea’s trusty Lack table is too small to house the massive Ender 5 without heavy modifications, but you’ll likely find an old table suited to the project at a second-hand furniture store or, if you’re lucky, by rummaging around your garage or attic.

That said, the Lack can work. Maker Martin Steinorth offers a great mod guide on MyMiniFactory if you’re up for the challenge.

With the frame in hand, sourcing the other materials is pretty straightforward. Wood and plexiglass panels are widely available at hardware stores.

You can expect to pay no more than $60.00 for all the plexiglass you’ll need, and likely less if you go the wood route. From there, you can 3D print the brackets, mounts, door handles, and the like, or purchase these, too.

If you’re on a tight budget but desperately need an enclosure, using a handful of exercise or kids’ play mats is an easy and thrifty solution.

These widely-available ethylene-vinyl acetate mats boast decent insulative properties and do a good enough job at keeping the ambient temperature around the Ender 5 nice and toasty. You can snap up a kit for around $20.00 to $30.00.

You’ll need six panels to construct a six-sided cube to enclose the Ender 5.

Using the toothed interlocking edges to hold the enclosure together means you won’t need to spend money on screws or brackets. An added benefit of the interlocking edges is easy removal, granting access to the printer when you need it.

The downside? The edge cuts do have minor gaps, which can let the occasional gust of cool air in, but at this price, this is more a quirk than a major issue.

Removing a panel to peak in allows the hot air to escape, potentially ruining the print. To counteract this, you can carve out a hole in the front mat, then insert a plexiglass window, although this does up the cost a little.

A wood and plexiglass enclosure is another DIY option that shouldn’t pose too much of a challenge for seasoned makers with experience working with wood.

Much like the furniture enclosure, the basic idea is to create a wood enclosure with an acrylic front panel to house the Ender 5.

It wins points over cheaper options like the exercise mat option for looks, visibility, and insulation – wood, though not the best option out there, performs well for the relatively low stable temperatures needed for heat-sensitive filament, especially if you take the time to ensure there are no air gaps.

The trade-off compared to lower-cost alternatives is a slight bump in material costs.

However, this all depends on whether you have spare wood lying around or the going rates in your area. You also need to factor in the cost of glue, screws, and brackets, but also trim and LEDs if you want to add some flair to your Ender 5 enclosure.

Another point to consider is the complexity of the build.

There are guides out there, but these tend to focus on the Ender 3, so it’s worth having a solid plan beforehand to avoid nasty surprises, especially if you’re running the larger Ender 5 Plus or want to install a hinged front door.

Borrowing the same basic design concept as the wood and acrylic build, a plexiglass Ender 5 DIY enclosure grants the best visibility of any homemade option.

You can expect to pay slightly more for it, but the assembly difficulty is roughly the same.

On the thermal side of things, plexiglass is a strong insulator, keeping your print jobs at a stable temperature. It outclasses wood in that respect, and with a robust design, you can easily create a tightly sealed chamber protected from drafts.

Maker schlem over on Instructable offers a solid blueprint to get you started, though it needs adapting for the Ender 5.

You’ll want to consider whether you need a hinged door, need filament holes, or prefer to house the spool inside the Ender 5 enclosure, and whether you want extra space around the printer to avoid dismantling the enclosure for maintenance and repair work.

Are the Ender 5 and Ender 5 Pro the Same Size?